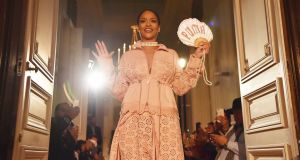 Singer Rihanna walks along a Paris catwalk to promote a collaboration between her Fenty brand and German sportswear company Puma in a picture taken in September 2016. Photograph: Pascal Le Segretain / Getty Images 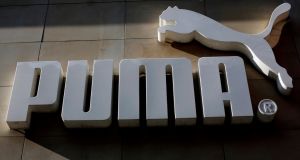 The logo of German sports goods firm Puma is seen at the entrance of one of its stores in Vienna, Austria. Photograph: Leonhard Foeger / Reuters

The French company’s plan to give up control of Puma, focusing solely on luxury and catwalk brands like Stella McCartney and Saint Laurent, sent the German sportswear outfitter plummeting 16 per cent in early Frankfurt trading.

The fall was its worst since September 2001. The plan, under which Kering will distribute to its investors 70 per cent of the shares of Puma, will leave Kering founder Francois Pinault’s holding company Artemis with about 29 per cent of Puma.

Kering fell as much as 2.3 per cent in Paris after earlier rising as much as 1.6 per cent. Kering’s decision disappointed some Puma investors who had hoped that the French company would find a buyer willing to pay a premium for the shares.

“This exit scenario is not the best one for Puma’s minority shareholders,” Cedric Lecasble, an analyst at Raymond James in Paris, wrote in a report.

“A straightforward disposal of Puma at a premium might have been partly priced in by the market.”

Also, Kering shareholders may decide to sell the Puma shares they receive in the spinoff, pressuring the stock in the short term, he said.

Kering follows rivals in cleaning up its portfolio after LVMH sold Donna Karan and Hermes International divested Leica. The decision to spin Puma off is evidence of a lack of acquisition opportunities in luxury goods in the near term, Lecasble said.

Kering bought Puma in 2007 as part of a push into sport and lifestyle brands that also saw the group acquire skateboarding brand Volcom. Puma was seen at the time as a pioneer for its fusion of fashion and performance clothing and its collaborations with designers from Philippe Starck to Alexander McQueen.

Puma’s shares have underperformed Germany’s DAX Index since Kering bought the stake for €330 a share. The stock has returned 5.7 per cent including dividends, compared with 89 per cent for the benchmark.

In the same period, Nike returned 454 per cent and Adidas returned 360 per cent.

“The contemplated distribution of Puma shares to our shareholders would be a significant milestone in the history of the group,” Kering Chairman Francois-Henri Pinault, the son of Francois Pinault, said in the statement.

“Kering would dedicate itself entirely to the development of its luxury houses.”

Puma accounted for about 30 per cent of Kering’s sales in 2016. Under Kering’s ownership, initiatives like the higher-priced Fenty Puma by Rihanna collection have helped the apparel maker boost brand image and profitability after a period when low desirability and an overextended store network had made for an unpopular match with investors.

But Kering struggled to integrate it firmly into its stable of other brands, and the company has promised shareholders it would work toward becoming a pure player in luxury.

Sophie Park, an analyst at Bank of America Merrill Lynch, cut Puma shares to underperform from buy, saying the stock doesn’t deserve a valuation premium to Adidas given that the companies are growing at about the same rate. The company also may be pressured by price-cutting in the European market, she wrote.

The Pinaults have gradually pushed Kering’s portfolio upmarket since the company took a controlling stake in Gucci in 2001. Kering will sell its remaining lifestyle holding, Volcom, “when the time is right” and a solution is found that is good for both Kering and the brand, chief financial officer Jean-Marc Duplaix said.

Puma is based in the German provincial town of Herzogenaurach, the same city as Adidas. The two companies were founded by brothers, and both had an early core foothold in soccer.

Adidas is by far the bigger of the two by sales and market value, while Puma has sought to burnish its credentials in street fashion and collaborations with music superstars like Rihanna.

“We’re very pleased Kering has proposed this way to reduce its stake in Puma, as it allows us to continue with our current business strategy,” Puma chief executive Bjoern Gulden said, adding there will be no changes to the company’s strategy due to the change of ownership.

Kering will retain about 16 per cent of Puma’s outstanding shares and said it will remain a long-term shareholder, despite speculation it could exit entirely.