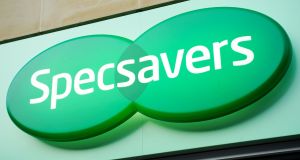 Specsavers has more than 1,700 stores across the UK and Ireland. Photograph: iStock

Profit at the Irish distribution and support arm of Specsavers increased by 87 per cent amid declining turnover as some stores sourced their support services from third parties.

Recently filed accounts for the year ended February 28th, 2017 show pretax profit increased to €705,083 at Ireland Specsavers Limited. The principal activity of that company is to “provide support functions to the Specsavers Group’s Irish retail operations, hold investments in group undertakings and to liase with the Specsavers Group”. Additionally, the company distributes optical products to the Irish retail operations.

Turnover in the period fell by almost 30 per cent, but the company directors flagged this in the accounts as something they had been expecting.

“The decrease in turnover is a result of management’s decision to allow certain Specsavers entities to source some support services directly with third parties. The decrease is in line with management’s expectations,” the note said.

While the group’s operating profit almost halved to €53,315, that was helped by income from shares in group undertakings worth €650,184 and other smaller income items.

With more than 1,700 stores across the UK and Ireland, Specsavers works by partnering with its business owners who run and manage the retail outlets. Specsavers itself provides back office functions including marketing, accounting, IT and wholesaling to those partners.

The Irish distribution company in question employed seven people in the period, up one from the previous year, with wage and salary costs up 20 per cent at €532,654. That company has significant holdings in four stores in the Republic including the outlets in Cork, Dun Laoghaire, Tallaght and Liffey Valley.