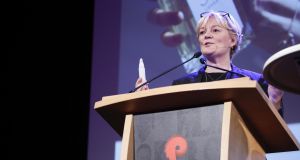 Businesswoman Jo Malone at the Pendulum Summit in Dublin on Thursday, where she said leaving her fragrance brand was “the greatest mistake of my life”. Photograph: Conor McCabe Photography

Jo Malone, the businesswoman who founded the eponymous fragrance brand now owned by Esteé Lauder, told the Pendulum Summit in Dublin on Thursday that leaving the brand was “the greatest mistake of my life”.

Ms Malone left Jo Malone London in 2006, a few years after she was diagnosed with, and beat, an aggressive form of breast cancer. She had sold the brand to Esteé Lauder in 1999, but had remained on board to help run it.

At Pendulum, a two-day business motivation conference staged at the Convention Centre Dublin by former rugby player Frankie Sheahan and his wife Norma Murphy, Ms Malone told the audience that she realised immediately afterwards that leaving was a mistake.

“The day I left, I wanted to be the last one to lock the door at Sloane [Street, the Chelsea location of one of the brand’s flagship retail outlet],” she said.

“As I turned the key in the lock, I realised that it was the biggest mistake of my life. I was leaving everything I had built. But it was too late. The press release had gone out and all the legals had been signed.”

Ms Malone said that as part of her exit, she had agreed a five-year non-compete clause with Esteé Lauder, which she said was “incredibly difficult”.

After her non-compete clause expired in 2011, she set up a new brand, Jo Loves, which had to be tailored so as not to be confused with the brand that bears her name.

She said Jo Loves recently signed two agreements for a new paint-on perfume product, branded A Fragrance Paintbrush. She said it will be available to shoppers in Ireland from March 1st at Space NK, on Dublin’s Grafton Street.

Earlier at Pendulum, media entrepreneur Randi Zuckerberg, sister of Facebook founder Mark Zuckerberg, told the audience of her frustration that the Silicon Valley technology industry is dominated by men – Ms Zuckerberg was an early executive at her brother’s company, but later quit.

“On one hand I loved being part of a company like Facebook that was changing the world, I loved being in Silicon Valley where everywhere you walk people are talking about solving big problems. I hated being the only woman in the room for 10 years,” she said.