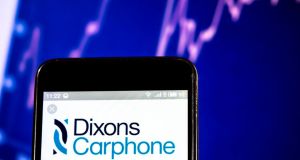 Shares in Dixons Carphone, up 5 per cent over the last year, closed on Monday at 142.5 pence, valuing the business at £1.7 billion.

The group, which reiterated the financial guidance given at its interim results last month, said growth in UK electricals and its international division had been offset by continuing declines in mobile phone sales in its home market.

Alex Baldock, chief executive since April 2018, is leading a programme to turn around Dixons Carphone which has been damaged by a shift in the mobile phone market as customers keep their handsets for longer, choose cheaper SIM-only deals, and turn to more flexible credit-based offers.

His plan is to focus on the group’s core electricals business while revitalising its mobile phones operation. He also wants to bring the retailer’s stores and online businesses closer together and develop its credit business.

Dixons Carphone which trades as Currys, PC World and Carphone Warehouse, said like-for-like sales in the Britain and Ireland electricals division rose 2 per cent in the 10 weeks to January 4th, with strength in TVs, gaming, smart tech and small domestic appliances. The company said it won share in a market down 3 per cent year-on-year.

However, sales in the mobile business on the same basis fell 9 per cent in the division covering Britain and Ireland, which the group said was in line with expectations.

Group like-for-like sales growth was zero. That compared to analysts’ average forecast of a 1 per cent fall and a 2 per cent fall in the second quarter.

Shares in Dixons Carphone, up 5 per cent over the last year, closed on Monday at 142.5 pence, valuing the business at £1.7 billion (€2 billion).