Dillon previously worked in the Ibec group’s press office, as well as on campaigns 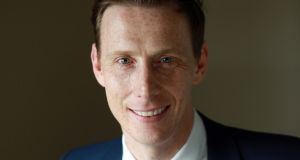 Retail Ireland, the Ibec group that represents the retail sector, has announced the appointment of Arnold Dillon as director.

Mr Dillon joined Ibec in 2003 as European affairs executive, and subsequently worked as press officer and then as Ibec’s head of press and public relations.

In recent years, he was to the fore in developing Ibec’s campaigning capability, and, as head of strategic campaigns, worked on Ibec’s response to Brexit and other key campaigns.

1 Suspicions rife as key Brexit trade talks begin in Brussels
2 Irish companies restrict travel over coronavirus fears
3 Life as a Facebook moderator: ‘People are awful. This is what my job has taught me’
4 Corona beer firm reeling after 8% slide due to coronavirus
5 Bogus notion that supply will cure our housing woes
6 Coronavirus rocks financial world as hopes for containment fade
7 ‘The only time apartments were viable was in . . . Ballsbridge, Killiney and Dalkey’
8 Pharma giant AbbVie warned Government against ‘unfair’ €572m tax bill
9 How well paid do you think you are? Here’s how to work it out
10 Why Irish banks are now looking beyond vulture funds on problem loans
Real news has value SUBSCRIBE