Employees express disappointment that management did not attend hearing 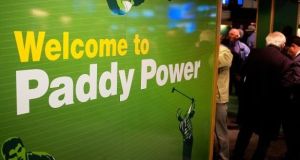 The workers have been engaged in an ongoing dispute with the company, owned by Flutter Entertainment Plc

The Labour Court is to make a decision in the coming days on a claim by workers at Paddy Power betting shops for better wages and conditions.

A delegation representing some 300 workers who are members of Mandate trade union attended a Labour Court hearing on Friday where they put forward their case for a pay increase, a sick pay scheme, staffing levels and premium rates of pay for those who work on a Sunday.

Mandate, which represents the workers, said it was “completely unacceptable” that Paddy Power management had not turned up for the hearing.

The workers have been engaged in an ongoing dispute with the company, owned by Flutter Entertainment Plc, which has escalated in recent months after management declined an invitation to attend talks at the Workplace Relations Commission in July.

Workers are seeking the introduction of a pay scale starting at the living wage of €12.30 per hour.

Paddy Power betting shop worker Vicky Callow expressed disappointment at management’s refusal to attend the Labour Court and said employees would not be backing down.

“All we’re asking for is some fairness and decency,” she said.

Last year, workers at the betting shops who were denied rest breaks, received as much as €92,000 in compensation after the Workplace Relations Commission (WRC) completed adjudication on 92 separate cases in July.