High Court tells US attorney to come up with €169,000 payment 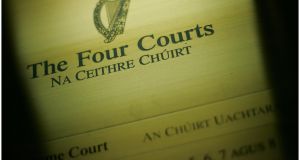 A High Court judge has told a US attorney he has until next Tuesday to come up with €169,000, which he admits he owes a businessman, or face possibly being sent to prison.

Lawrence O’Neill, a father of three who lives in Dublin and is an attorney in the US, told the court he hopes to have the money for Adriano Fusco, from Johnstown, Co Kildare, over the next few days. He had also asked to be given until December 29th to get the funds.

Mr O’Neill, of Gilford Road, Sandymount, appeared in person after Mr Justice Tony O’Connor ordered last week he be brought before the court to explain why he should not be committed to prison for contempt of an earlier court order to pay the money.

The case arose after Mr O’Neill agreed to hold €325,000 from the sale of a business involving Mr Fusco and his brother Fabio. While some of it was paid, some €169,000 was not, and Mr O’Neill said it was being held in his New York account.

Despite repeated promises by Mr O’Neill to transfer the money, it never arrived in Mr Fusco’s account.

Mr Fusco later obtained a court order requiring Mr O’Neill to transfer the money but, when it did not materialise, Mr Justice O’Connor ordered he be brought before the court to explain why he should not be jailed for contempt.

On Thursday, Mr O’Neill told the judge he had mistakenly instructed that the money, which was held in his New York account and supervised by the New York Bar Association, be sent to a client in Dubai.

He was waiting for the money to be returned by the client, who had accepted he should not have received it, he said.

The Dubai client had said, because of “certain actions by the government of India”, it had not been possible so far to transfer the money, he said.

Mr O’Neill said he expected to have funds available to pay Mr Fusco when a separate transaction in which he was involved closed on Thursday.

He asked that he be given until December 29th, stating: “I will do whatever is necessary to obtain the funds.”

The judge adjourned the case to Tuesday and said it was in Mr O’Neill’s interests to ensure the money was transferred by then.

The judge refused a request from Mr Fusco’s counsel, William Maher, to have Mr O’Neill surrender his passport so he would remain in the jurisdiction, Mr Maher said his client believed what Mr O’Neill had said was “another baseless promise”.

Mr O’Neill, who said he has Irish, Canadian and US passports, said he thought such a request “silly” as he had a family and a house here.

The judge said he was taking Mr O’Neill at his word as a member of the New York Bar, but that there would be very serious consequences if he did not appear next week.

9 How much can Ireland borrow to get through this Covid-19 emergency?