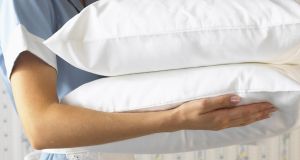 Celtic Linen, a supplier of linen to hotels, hospitals and the Health Service Executive, is set to exit court protection from its creditors after securing investment from Causeway Capital, a private equity investor backed by the Ireland Strategic Investment Fund.

The Wexford-based company, which employs 380 people in Drinagh, entered examinership at the end of September as it was insolvent after sustaining losses in recent years.

It is understood that Causeway, founded earlier this year by David Raethorne and Matt Scaife, who were previously involved in a number of businesses, including Helix Health and Smiles Dental, will initially inject €1 million into Celtic Linen, with a commitment to invest a further substantial amount.

“We are looking forward to working with the management team, led by chief executive officer Donald Campbell and chief financial officer Joanne Somers, to stabilise the group and return the business to growth.”

In operation since 1926, the company is a leading supplier of bed linen, towelling and table linen to the hospitality sector, and scrub suits, patient wear and ward linen to the healthcare sectors.

At the time it was seeking court protection, the High Court was told it had liabilities of €14 million and its biggest creditor, AIB, was supporting the application.

On a going concern basis, the company had a deficit of liabilities over assets of €2.7 million, while liquidation would see the deficit rising to €9.3 million, the court heard in September.