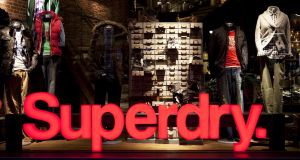 Fashion retailer Superdry saw first-half profit all but wiped out as its new leadership sought to address what it regards as the missteps of the previous management.

Revenue fell 11 per cent to £369.1 million (€436.1 million), as Mr Dunkerton, also the group’s biggest shareholder with an 18.5 per cent stake, tackled “legacy issues” across the business. He is focusing on full price sales and reducing promotional activity. That hurt revenue but is helping gross margins to recover.

Mr Dunkerton cautioned it will take two to three years to turn Superdry around. – Reuters

1 State subsidises public sector retirees to cover gap until State pension
2 Who are Ireland’s 17 billionaires?
3 My father in a nursing home wants to gift me his house
4 Are there annual limits on inheritances or gifts to a child?
5 Trump holds America up as ‘example for the world’
6 Countries that fail to attract immigrants will lose out – Microsoft chief
7 Nama lends Cosgraves €15m to fund huge apartment development
8 Cubic Telecom raises more than €11 million in funding
9 Q&A: Why has the pension age question suddenly become an election issue?
10 Help, I’ve no PRSI stamps – can I still get a pension?
Real news has value SUBSCRIBE