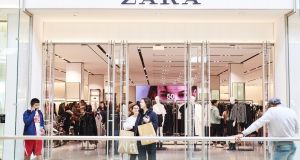 Inditex reported an acceleration in sales as the Zara owner benefited from its expansion into e-commerce and other technologies that make retail more efficient.

Sales rose 7.5 per cent to €19.8 billion in the nine months through October, meeting analysts’ estimates. The company maintained its forecast for like-for-like sales growth of 4 per cent to 6 per cent this year.

Inditex’s introduction of RFID tracking technology, which makes it easier to manage inventory and frees up employees to spend more time with customers, is boosting sales, Richard Chamberlain, an analyst at RBC Europe, has said.

Operating profit came in a hair ahead of analysts’ estimates. Changes in international accounting standards have lifted operating profit this year, mostly related to how Inditex deals with leases. Analysts have said that makes predictions difficult.

Inditex is adding Anne Lange, a French tech entrepreneur, to its board. She co-founded Mentis, a software startup specialised in the internet of things, making her well-placed to advise on matters such as RFID.

The stock has gained 28 per cent this year, on track for the first annual increase in three years. The stock quintupled in the eight years after the financial crisis as it withstood a consumer downturn. – Bloomberg

1 South Dublin Credit Union members urged to borrow more to ensure survival
2 Farmer seeks to challenge €3.6bn Intel plan in High Court
3 Who are Ireland’s 17 billionaires?
4 EU banking watchdog describes rejection of Cross nomination as ‘unfortunate’
5 US treasury secretary Mnuchin expects next China trade talks in ‘near future’
6 Cosgrave should give his speech to Web Summit’s partners in Saudi Arabia
7 My father in a nursing home wants to gift me his house
8 Heineken outrages parties other beers don't
9 Growth of Dublin must continue even as we strive for balanced regional development
10 LinkedIn confirms plan for massive campus in Dublin city centre
Real news has value SUBSCRIBE