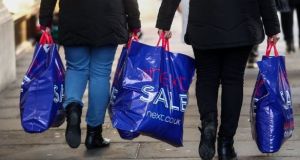 Next is getting ready for Brexit.

Retailer Next has become the latest UK company to set out a strategy for life post-Brexit, as it outlined plans on Tuesday for a new Irish company, which should help Irish customers avoid a steep increase in prices in the event of a no-deal departure from the UK.

The UK retailer, which reported a 0.5 per cent rise in first-half profit and raised its guidance for the full year, said that it has set up a new Irish company, which will own goods sent from the UK to its Irish stores. Company records show that Next Retail (Ireland) Limited was set up earlier this month. Next operates 27 stores in Ireland, as well as a directory and online shopping service.

“This means that goods can be imported into Eire at a cost [plus a reasonable transfer premium] and will therefore incur very little additional duty,” the retailer said.

If Next didn’t adopt this strategy, then goods sold directly to Irish customers from the UK would incur duty on the sale price of the goods.

“ This would represent a very serious increase in costs to consumers as any increase in selling price required to recover the cost of duty would itself incur duty for the consumer,” the retailer says, although it notes that it would be mitigated by the fact that purchases of less than €150 would not incur duty in any case.

To cope with a scenario of added customs on duties on exports into the EU, Next also outlined plans for a new German company. Goods will be sold to this German company from its UK company. As these goods will constitute imports into the EU, then they will be done at cost “plus a reasonable transfer premium”, in the same way as if they had been imported direct from the overseas territory in which they were manufactured. Next said it will bond this facility so that goods will only incur duty when they leave it and go into the EU.

“This will enable unsold goods that return from Germany to the UK to avoid double duty,” it said.

Next also warns that unless the UK government comes to an agreement which would see it retain its GSP relief, then this issue could add about 2 per cent to the cost of its goods in the EU.

“When the UK leaves the EU, if goods with GSP relief are imported into the UK and subsequently exported to the EU they would lose GSP relief and incur full duty,” it warns.

Next reported a 4.5 per cent increase in the six months to July 31st on Tuesday, ahead of guidance, although it warned that “the UK retail market remains volatile, subject to powerful structural and cyclical changes.” The retailer said it remains “cautious in our outlook for the rest of the year”.