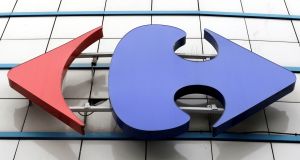 French retailer Casino has become embroiled in a war of words with Carrefour after it claimed it had rejected an approach from its larger rival over a possible tie-up.

Casino said on Sunday night that it had been “contacted over the last few days with a view to a possible combination”. It said its board of directors met on Sunday and “unanimously” rejected the approach.

But Casino’s statement was contradicted by Carrefour, the world’s second-largest retailer by revenues.

In a contrasting separate statement on Monday, Carrefour said: “Carrefour denies having solicited Casino and is surprised that a merger proposal that does not exist has been submitted to Casino’s board of directors.”

A Casino-Carrefour tie-up would have combined two of the biggest names in the highly competitive French food retail market, where players are seeking to eke out profits amid a multiyear price war and ramp up their ecommerce offerings to resist the march of Amazon.

Casino said the retailer’s chief executive, Jean-Charles Naouri, and his counterpart at Carrefour, Alexandre Bompard, had met in Paris on September 12. After that meeting, the chief executives had “designated counsel” to advise them. Carrefour declined to comment on this statement.

According to two people familiar with the situation, the meeting between the two executives was organised by Alain Minc, a businessman and political adviser, and took place at Mr Minc’s offices in Paris. Mr Minc did not respond to a request for comment.

Casino’s share price has plummeted this year, reflecting investor concerns over its high levels of debt and the structural complexity with which Mr Naouri, its controlling shareholder, has built the group.

Just over a week ago, Casino’s parent company Rallye announced it had secured a €500 million credit line from French banks to strengthen its financial position, pushing Rallye’s shares up 7 per cent. Casino’s shares rallied slightly but are still down almost a third this year. – Copyright The Financial Times Limited 2018