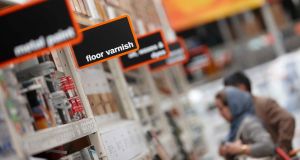 Home improvement retailer Kingfisher reported a 15 per cent fall in half-year profits after a poor performance in France, but said it was on track to grow its gross margin in the full year.

The company, which owns the B&Q and Screwfix brands in Britain and Castorama and Brico Depot in France, said profit in France had plunged 30 per cent in the period, on weaker sales affected by weather, as well as higher costs.

Kingfisher said that customer perception of Castorama was not where it needed to be and there was a lot more to do to improve the business, and a plan was underway to help start that process. Earlier in September it replaced its French CEO.

The UK and Polish businesses had shown solid performances in the period, said Kingfisher, although it noted that the outlook was mixed and said the retail environment was “making our task more difficult than we expected”.

In Britain, the DIY sector has struggled this year, with rival Homebase shutting stores and Wickes, owned by Travis Perkins, warning of tough trading, as consumers’ disposable incomes are squeezed and uncertainty connected to Brexit weighs on the housing market.

“Looking to the full year we remain on track to deliver our strategic milestones for the third year in a row and have put actions in place to support our performance,” chief executive Veronique Laury said in a statement on Wednesday. – Reuters