Chief proposes debt restructuring and selling property to repay $1.5bn worth of debt 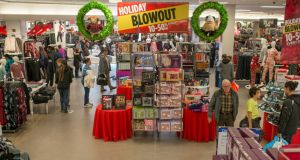 Eddie Lampert, chairman and chief executive of Sears Holdings, is attempting to avert bankruptcy at the department store chain with a plan for a broad financial restructuring that could force creditors to swallow heavy losses.

Under the plan put forward on Monday by ESL, the billionaire’s hedge fund, Sears’ $5.6 billion debt burden would be slashed by almost four-fifths. Creditors would swap $1.1 billion worth of their debt holdings for equity stakes, or take a haircut on their interests.

The company, which has closed hundreds of its Sears and Kmart stores in recent years, would also pursue additional property sales to repay $1.5 billion worth of its debt. Further disposals, including Sears’ home services and replacement parts businesses, would cut another $1.75 billion worth.

Sears, whose market capitalisation has collapsed from 2007 highs of almost $30 billion to $129 million, has acknowledged there is “substantial doubt” about its ability to “continue as a going concern”. It faces a loan repayment next month.

ESL emphasised the need for urgent action by the board, saying “Sears must act immediately to have sufficient runway to continue its transformation”. If it does not, ESL told the company, the alternatives could “reduce, if not completely eliminate value for stakeholders”.

A person familiar with the matter said Mr Lampert, who through ESL and associated investors is also Sears’ largest shareholder, was concerned that filing for bankruptcy protection could ultimately lead to an outright liquidation, given the example of Toys R Us.

Mr Lampert has pitched a series of plans to the retailer’s independent directors, including a proposal in April to buy its Kenmore appliance brand and SHIP, its home improvement division. The company had already agreed extensions on the maturities of loans from affiliates of ESL but its debt burden has become increasingly untenable.

The effect of the latest plan would be to cut Sears’ current debt by 78 per cent to $1.2 billion, decrease its annual interest bill by 80 per cent to $88m and inject $1.2 billion of liquidity over two years.