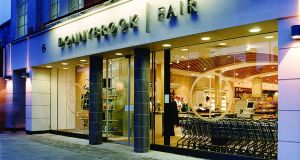 Donnybrook Fair, which has been acquired by Musgrave.

Musgrave, the owner of SuperValu, has agreed to buy the Donnybrook Fair chain of upscale Dublin supermarkets in a deal worth up to €25 million.

The Cork retailing and wholesaling group this morning finalised the buyout from husband and wife team, Joe and Mary Doyle, who founded and control Donnybrook Fair.

It is understood the deal includes Musgrave taking on about €10 million of existing debt in the business. The Doyles stand to receive a payment for their shares that could eventually rise to almost €15 million, depending upon Donnybrook Fair’s performance over coming years.

Mr Doyle will continue to run the business for Musgrave, growing the brand in partnership with its new owner in an “earn out” arrangement. Musgrave will invest in revamping some stores, including its flagship store in Donnybrook.

The transaction includes four stores in Dublin – in Donnybrook, Stillorgan, Malahide and Baggot Street – and one in Greystones in Wicklow. It also includes Donnybrook Fair’s food production facility in west Dublin, which was of particular interest to Musgrave.

The deal includes the freehold interest on two of the Dublin stores and also the production facility. The remainder of the properties are leased.

Donnybrook Fair employs about 250 staff, who will continue to work for the business under the new owner. It had sales last year of close to €28 million.

The deal is subject to clearance from the Competition and Consumer Protection Commission.

Dunnes Stores was close to completing a deal for Donnybrook Fair earlier in the summer, but it was ultimately overtaken in negotiations by Musgrave. It is understood Dunnes made belated attempts this month to revive its interest, but Musgrave and the Doyles were too close to a final agreement at that stage.

The deal strengthens Musgrave’s position in the booming Dublin grocery market, where SuperValu’s base is built mainly around the since-rebranded Superquinn outlets that Musgrave purchased in 2011.

As consumer trends within the Irish grocery market shifts further towards quality Irish foods, the deal also strengthens Musgrave and SuperValu’s offering in that segment of the market, given Donnybrook Fair’s association with epicurean goods.

“Donnybrook Fair increases our penetration of the Dublin food market and our intention is to maintain and grow the brand for the long term. We are looking forward to taking it to the next stage of development,” said Chris Martin, chief executive of Musgrave.

“Musgrave is as passionate as we are about the heritage and future of Irish food,” Mr Doyle said. “I look forward to working in partnership with the Musgrave team to grow the Donnybrook Fair brand.”