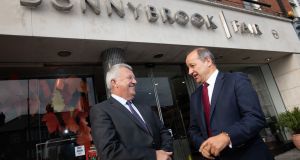 The deal for upscale Dublin supermarket chain Donnybrook Fair was done just after dawn on Friday in the offices of a Dublin law firm.

But Joe Doyle, who controlled the group with his wife Mary, had long been on speed dial for its acquisitive larger peers, Musgrave and Dunnes Stores.

The Doyles built a chain of five well-regarded epicurean food outlets in prosperous parts of greater Dublin (a sixth outlet in Grand Canal Dock closed this year) as well as a food production facility. But the business, with sales of close to €28 million and 250 staff, has accumulated €10 million in debt: €8.5 million in bank loans and €1.5 million in expensive mezzanine financing.

For well over a year, Dunnes and Musgrave, both keen to burnish their credentials in the upscale food sector, courted Joe Doyle to sell. Musgrave, the Cork-based owner of SuperValu, was also seeking to buttress its position in booming Dublin.

Towards the end of last year, Dunnes made its move first, offering the Doyles well over €20 million for the business as well as taking on its debt. Anne Heffernan of the Dunnes dynasty, and daughter of Margaret Heffernan, was central to talks.

Dunnes went as far as completing due diligence by the beginning of the summer. Then both sides haggled over the price, with Musgrave lurking in the background. Six weeks ago, Dunnes exited the process and Musgrave took the boxseat.

Dunnes tried to re-enter the process as recently as a week ago, with personal interventions coming from those at the highest level of the company. Musgrave moved quickly, however, to wrap up a deal.

On Thursday night, both sides and their advisers assembled in the offices of Musgrave’s law firm, Eversheds. Musgrave was also advised by KPMG, while Donnybrook Fair was advised by financial consultancy Crowe and law firm Crowley Millar.

Musgrave agreed to buy the business, invest in its store network and keep the brand. It also wanted Doyle to stay on and run it for a couple of years. It offered the Doyles close to €15 million including an earn-out, and took on the €10 million debt. The deal was signed around dawn on Friday.

Later on Friday, Chris Martin, chief executive of Musgrave, explained the rationale for the deal. Buoyed by the success of Musgrave’s purchase of La Rousse foods from Aryzta, Martin sees the Donnybrook Fair deal as a similar strategic move.

“We will keep it as a separate brand. Donnybrook Fair will bring us to new parts of the market,” said Martin.

Musgrave’s “Food Island” strategy is centred around developing high-end food brands, with an in-store food-service element. It is also planning a drive into the Dublin market, by building new stores for SuperValu.

As Martin sees it, the deal for Donnybrook Fair perfectly complements those two strategies. There are no immediate plans, however, to introduce the Donnybrook Fair brand into SuperValu.

“We need to understand the brand more before we look at doing things like that. Donnybrook Fair is a premium business. When you mix brands, you have got to do it carefully.”

Martin says Musgrave plans eventually to expand Donnybrook Fair’s footprint beyond its existing five stores, although not outside the Dublin area. More immediately, it will fund improvements in the stores, especially at its eponymous flagship on Morehampton Road.

“We know how to manage a portfolio of brands. And we know how to work with family businesses, because we are one ourselves,” said Martin. “We’re looking forward to working with Joe to grow Donnybrook Fair.”