Spokeswoman for retailer’s Irish operations says cuts will be ‘UK-focused’, and no stores in the Republic will be hit 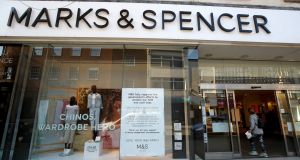 Marks & Spencer has seen its share price fall as the company announced plans to cut 950 jobs as part of a major restructuring. Photograph: PA Wire

Marks & Spencer plans to cut 950 jobs in yet another blow to British retailers, with shopping districts reeling from the coronavirus pandemic.

A spokeswoman for the stores’ Irish operations said the cuts would be “UK-focused”, and that no outlets in the Republic would be affected.

Marks & Spencer said the job losses would come from central support functions in its property and field operations, as well as its store management network. The cuts represent about 1.2 per cent of its workforce of 78,000.

Britain’s retailers are struggling to return to normal after months of store closures as lockdown measures have been progressively eased.

The move could be controversial, given that M&S took government support when furloughing 27,000 workers during the pandemic. The stock slumped as much as 2.6 per cent in London trading.

In an effort to avoid significant job losses the UK government has since offered businesses a £1,000 (€1,098) bonus for every employee who returns to work, but the measure has failed to stem the tide of job cuts. M&S said it has not decided whether to accept the bonus for employees who have returned to work.

The retailer has been trying to turn its fortunes around for at least the past decade. When it announced its results in May, chief executive Steve Rowe said the crisis may accelerate turnaround efforts at a business with a “history of slow cultural change”.

The company disbanded many working groups and committees in favour of a smaller top team that could make decisions faster, according to Mr Rowe. Employees in stores and support centres were working more flexibly, he said.

Wider strategic goals, such as reducing its clothing range and working with a smaller set of suppliers, have also been hastened by the crisis.

M&S has struggled in a highly-competitive grocery market, and after failing to keep up with online “fast fashion” rivals.

In May the company said it was outperforming its worst-case coronavirus scenario after reacting quickly to the pandemic, cancelling about £100 million of clothing and home orders. – Bloomberg