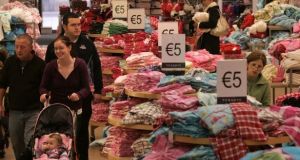 Penneys parent Associated British Foods says the temporary closure of its stores due to new Covid-19 restrictions will cost it £375 million (€416 million) in lost sales.

The group, which does not sell products online, said that as of Monday, all Penneys and Primark stores in Ireland, France, Belgium, Wales, Catalonia in Spain and Slovenia would be closed temporarily, representing 19 per cent of its total retail selling space. The company has 36 Penneys outlets in the Republic, the most in any market outside England.

It said that, assuming the UK government’s intention to close all non-essential shops in England for one month from November 5th to December 2nd is passed by lawmakers, 57 per cent of its total selling space would be shuttered.

Europe’s tough new lockdowns will hit non-food retailers hard, many of which make a large chunk of their annual profits in the so called “golden quarter” between Halloween at the end of October and the January sales.

Primark had been trading strongly after its stores reopened after a first wave of coronavirus lockdowns in the spring, achieving record UK market share. In September, the group had raised its profit forecast for Primark for the year to September 12th.

Primark does not sell online because the retailer does not consider this economically viable given the selling price of its products. During the spring lockdowns the group said it was not re-thinking its lack of an online business.

Full year 2019-20 results for AB Foods, which also has major sugar, grocery, agriculture and ingredients divisions, will be published on Tuesday.

AB Foods’ shares were flat in early trading on Monday but are down 35 per cent so far this year.

The group said it was implementing operational plans to manage the consequences of the latest Primark closures, including reducing operating costs.

But it said all orders placed with suppliers would be honoured. In July, the group said it expected to place more than £1 billion of orders.

British rival Next said last week a two-week lockdown in England, Scotland and Northern Ireland in November would reduce retail full-price sales by around £57 million.– Reuters