‘One of my personal milestones is that I’ll take Buymie public,’ says founder and entrepreneur 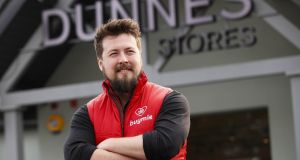 As the main man behind Buymie, the popular online grocery shopping app that has partnered with Lidl, Tesco and most recently Dunnes Stores, Devan Hughes knows a thing or two about deliveries. But he admits to being a little out of his depth right now as he seeks to cope with the ultimate delivery – his first child.

Baby Dorian arrived just over a week before Ireland officially went into lockdown for a second time. While Hughes is quickly adapting to sleepless nights and nappy changes, he’s also working hard to ensure his other baby, Buymie, continues to thrive.

It has been anything but business as usual for the company, which has been working overtime to deal with increased volumes during the Covid crisis.

“We’re adding significant numbers of shoppers across all of our markets and our network is growing rapidly,” he says.

While Hughes (and indeed everyone else) was taken by surprise by the pandemic, Buymie responded quickly to it, taking on additional staff and funding to ensure it could meet the added demand.

“At one point very early on during the first lockdown, we did a week’s worth of orders in a single day, which was unheard of. In a way we were very lucky because we had been focusing a lot on scaling our systems shortly before the crisis because of the tremendous growth we were already experiencing and so were able to cope,” says Hughes.

“Overnight, we were classified as an essential service and we very much were. I think sometimes the grocery sector is overlooked but food supply is an absolute staple of a functioning society and what we were doing was critical and came to be seen as that by both our partners and customers,” he adds.

Hughes, who still likes to spend a day each month going out to deliver orders to customers, has seen for himself just how well regarded Buymie is by the public, many of whom start off cautiously before deciding to buy all their groceries through the company’s app.

“If you look at our customer profile, it is quite broad. It would be 60 per cent female and 40 per cent male and the age demographic is typically between 25 and 35 so it is mainly young professionals, living primarily in apartments and semi-detached houses,” Hughes says.

For the uninitiated, the Buymie app allows customers to order grocery and household items from supermarkets and have their shopping delivered in as little as one hour by a personal Buymie shopper who works for them rather than the store.

The service has a fixed delivery fee of €4.99 or there are unlimited free deliveries available with the Buymie Plus subscription service for €11.99 a month or €99 per year. The company also charges a platform fee of 15.75 per cent, though this can be subsidised to as low as 5.75 per cent by retail partners. Buymie says the fees going to ensure personal shoppers are paid fairly for their time and service.

Founded by Hughes and Art Sokhikyan in 2014, but not fully launched until two years later, Buymie’s personal shopper service is now available to more than six million households across Ireland and Britain. It currently has 200,000 registered users and, in the first six months of this year, it recorded growth of more than 325 per cent year on year.

Even prior to the coronavirus pandemic, Buymie was on the up, with weekly volumes growing 200 per cent in 2019.

Initially available only in Dublin, the service found new traction early in the pandemic as people were unable or unwilling to risk shopping in person. Available throughout Dublin, the service is also now offered to large commuter towns such as Greystones, Maynooth and Howth.

In May, it launched in the UK through a partnership with the Co-op, servicing 200,000 households in Bristol and surrounding suburbs. More recently it has launched operations in Cork city and has plans to expand even further shortly.

“We’ll be launching in two new markets here early next year although we haven’t decided exactly where just yet. We’ve also identified 15 cities across the UK where we think our service could be really successful,” says Hughes.

“The UK is an obvious market but Ireland still has plenty of growth too. We’ve established a market leading position here and the online market will be worth north of a billion euro within the next three years.

“That is a seismic shift in channel segmentation as it was only worth €275 million three years ago,” he adds.

Learning the value of the market was what first piqued Hughes’s interest in the world of fast moving consumer goods. Despite having previously set up four businesses, which had all failed, and were a world away from what he is now doing, Hughes wanted in.

While many supermarket chains had, in the past, established their own dedicated delivery fleets for online shopping, these have often proved uneconomical.

“I was out for a pint with a friend and he told me that, while the online grocery market for the UK and Ireland was growing significantly in value, it was also losing £300 million a year. I thought it was fascinating to have such a large market, but for it to be so dysfunctional so I started taking an interest and looked at the long-term demand curves, which showed three growth channels: online, discount and convenience.

“That is when we decided to build a platform that would sit across all three channels,” he says.

“I thought our key offering would be rapid delivery – one hour – and it would be relatively small baskets. Hyperconvenience would be the space that we’d be in.

“But it isn’t just about this. It is surprising how easy it is to screw up a grocery order by substituting the wrong product and so on, so we spent time finessing the service by making things personal, such as calling shoppers to see if there was something else they wanted instead of the item that was out of stock.

“This meant that customers really began to trust us and when that happened then they were happy to spend more,” Hughes adds.

Grocery retailers might be welcoming Buymie with open arms these days but that wasn’t always the case. When the plucky outsider first started out, there were plenty of detractors. One of the State’s largest retailers even threatened legal action, although the entrepreneur is too diplomatic to name and shame them.

Ever the businessman he also doesn’t rule out working with them in the future.

“The legal threat was totally left field. We really didn’t expect that although maybe we were a bit naive but it was a really stressful time. I was doing grocery orders for up to 10 hours a day, every day and also trying to deal with legal letters from large corporate bodies who ultimately wanted our business to cease trading. We actually lost another co-founder at that time over it,” says Hughes.

“When I look back on it now, we found ourselves being accidental disruptors and found ourselves having to deal with the sector belatedly realising the game had changed. We actually ran out of money in June 2017 and Buymie was pretty much dead unless I could get the backing of some serious industry players,” he adds.

A turning point came when Hughes won the backing of consumer goods giant Unilever, which recognised all the same trends the start-up was seeing. It invested €100,000 in the company just to keep it afloat but that was enough to pique the interest of other backers, including former RTÉ Dragons’ Den investor and Superquinn chairman Eamonn Quinn, and Scott Weavers-Wright, who ran Morrisons online channel after the supermarket acquired his company, Kiddiecare, for £70 million.

Many others have since joined them and investment to date now stands at €10.5 million. Buymie has also won over a significant number of retailers as partners, among them Dunnes, which Hughes admits was not an easy win.

“It was a long courtship,” he says.

“Dunnes Stores is an incredibly unique business because it is the only founder-family run grocery business still in our lives. We have shared industry knowledge with them for many years and they are a very thoughtful business. They don’t enter into things lightly,” says Hughes.

As the entrepreneur sees it, online is challenging for all grocery retailers because, while much of the market is moving online, basket sizes are shrinking and there is much more transactional shopping.

“It is a rapidly expanding market and the balance sheets of these major companies have struggled with the capital expenditure requirements required to meet the demand. Specifically where we add value for our partners is with same-day delivery. Retailers may be able to do next-day, but we are the only service that can do large baskets in such a short time,” he adds.

Born in Dunshaughlin, Co Meath, and now living in Stillorgan with his wife Laiz Ferreira-Hughes and of course, Dorian, the 32-year-old admits to being a risk taker, something he thinks may stem in part from having parents who were keen on skydiving.

As he looks ahead, he expects to have to take plenty more risks as the business grows, especially if he wants to take it as far as he envisages.

“In five years’ time, we’ll be the number one grocery ecommerce platform in Ireland and will be a much bigger business than we are now,” he says.

“One of my personal milestones is that I’ll take Buymie public. We’re a long way from that at the moment but it is something I believe is achievable,” Hughes adds.