Partnership will give customers access to more than 1,000 restaurants across Ireland 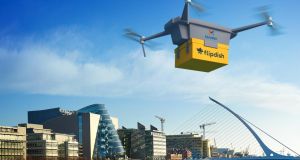 Should Manna secure licensing approval, it will become the guinea pig of a fledgling industry – autonomous drone flight.

The drone company that hopes to begin fast-food deliveries later this year has announced a partnership that will give customers access to more than 1,000 restaurants across Ireland.

The technology will mean anyone ordering food will have the option to select “drone delivery” when ordering through apps and websites.

The drones themselves are expected to fly at over 80km/h and deliver food in under three minutes, a move that could revolutionise the take-away business.

Manna, the Irish start-up which has been working its way slowly toward live testing later this year, has teamed up with Flipdish, the company that operates an online delivery platform used by restaurants and takeaways.

While details are scant, the first commercial tests will likely see food delivered to awaiting customers outside their homes, lowered down on a piece of string. The business model will see customers paying a delivery charge not far off what they might pay for a traditional service.

“Access to fast efficient delivery technology will be a game changer for the industry,” said Flipdish chief executive Conor McCarthy.

“Manna.aero’s drones will not only offer an amazing customer experience and increase restaurant profitability, they will also save lives by taking mopeds off the roads and reduce traffic and pollution.”

Flipdish was founded in 2015 and facilitates online orders from restaurants such as Chopped, Bombay Pantry and Base among others.

Manna is in the final stages of rolling out its drones “built to the highest levels of aviation safety” and could lead the way in drone services, an industry expected to flourish in the coming years.

Based at University College Dublin’s Nova innovation centre, it recently raised finance for what it has described as a “concrete and plausible” plan.

A video screened at a recent drone conference showed food being attached to the bottom of a drone, carried over a short distance and lowered to an awaiting customer in their back garden.

Should it prove successful, Manna will be in direct competition with technology titans such as Amazon, already far advanced in bringing out its own delivery system.

The company recently said it expects to scale its Prime Air drone quickly, aiming to start delivering packages to customers within months.