Sotheby’s to be sold to telecom titan Patrick Drahi for $3.7bn

Atlice Europe president Drahi is an avid art collector who is worth $8.6bn 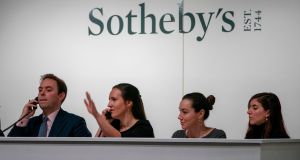 Sotheby’s, the auction house that has seen its shares drop 40 per cent in the past year, is being sold to telecom titan Patrick Drahi for $3.7 billion (€3.3bn).

Investors will receive $57 in cash per share of Sotheby’s common stock under terms of the agreement, according to a statement on Monday from the New York-based company.

The offer price represents a 61 per cent premium to Sotheby’s closing price on Friday. The transaction means Sotheby’s is returning to private ownership after 31 years as a public company.

Mr Drahi (55) is the president of Altice Europe, a publicly traded telecommunications business with more than 30 million customers. An avid art collector, he is worth $8.6 billion, according to the Bloomberg Billionaires Index.

“Sotheby’s is one of the most elegant and aspirational brands in the world,” Mr Drahi said in the statement. “As a longtime client and lifetime admirer of the company, I am acquiring Sotheby’s together with my family.”

LionTree Advisors is advising Sotheby’s in connection with the transaction. BNP Paribas and Morgan Stanley are acting as advisers to BidFair, an entity controlled by Mr Drahi. BNP Paribas is sole financing provider.– Bloomberg