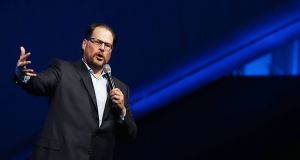 Salesforce CEO Marc Benioff. He and co-CEO Keith Block have been chasing new markets to reach an annual revenue goal of $26bn to $28bn by fiscal year 2023

Salesforce has agreed to buy Tableau Software in an all-stock deal valued at $15.3 billion (€13.6bn) in a major bid to build its analytics offering.

The takeover of Tableau will be Salesforce’s largest deal to date, according to data compiled by Bloomberg. Co-chief executive officers Marc Benioff and Keith Block have been chasing new markets to reach an annual revenue goal of $26 billion to $28 billion by the fiscal year 2023.

Tableau will remain headquartered in Seattle, and will continue to be led by chief executive Adam Selipsky, a former Amazon. com executive who has been transitioning Tableau’s software tools to cloud-based subscriptions.

Each share of Tableau Class A and Class B common stock will be exchanged for 1.103 shares of Salesforce common stock, the companies said in a statement on Monday.

The deal price represents a premium of 42 per cent to Tableau’s closing price on Friday.

Known for its chart applications and analytics dashboards, Tableau has been broadening its product line to include data clean-up and machine-learning tools, enabling it to compete in the wider data-warehousing.

Salesforce sees the deal cutting its full-year adjusted earnings per share outlook by 37 cent to 39 cent to $2.51 to $2.53 a share.