Chain spends €500m on produce from over 200 local suppliers 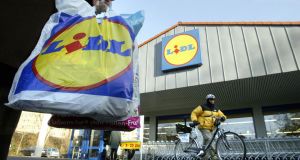 In 2000, Lidl had less than 10 Irish suppliers: the number now stands at in excess of 200. Photograph: Thomas Lohnes/AFP/Getty Images

Beef, bread and booze were the three Bs driving exports to Lidl’s pan-European network from its Irish suppliers last year, as the German discounter ramped up its spending on locally sourced products for its shelves at home and abroad.

All told, it spent €500 million on produce from Irish suppliers in 2017 with a substantial number of businesses using its retail arm in the Republic as a springboard for wider markets in the UK, Germany and Spain as well as other countries throughout Europe.

In 2000, Lidl had less than 10 Irish suppliers: the number now stands at in excess of 200, an indication of the importance it now places on its relationships with local businesses to drive footfall.

All told, almost 40 of its Irish suppliers are now exporting to 26 different countries where Lidl operates with the most popular export markets proving to be the United Kingdom, Germany. France and Spain.

Lidl’s own-brand beef and meat products, its locally sourced cream liqueur and its Irish craft beers as well as its breads and its cheeses were the leading lights at home and abroad, the company’s senior executives said as they launched a €200,000 campaign aimed at encouraging start-up food suppliers to develop market-ready products for widespread distribution across Lidl’s network .

Following the success of the first Kick Start Supplier Development Programme in 2017, Lidl wants more Irish suppliers to compete to supply it with a guaranteed volume of their products for a limited edition Best of Ireland food promotion in September, 2018.

It will select up to 80 of Ireland s top products which will be available in all its stores throughout the Republic and, for the first time, a handful of the products will be given the opportunity to be sold in Lidl stores across Europe.

The Kickstart programme, which is supported by Bord Bia, is designed to help small and medium Irish food and drink businesses to grow their brand and build their supply network.

The retailer said the response to its Kick Start in 2017 programme was “phenomenal” with more than 450 products entered by suppliers across the State. It selected 54 new Irish suppliers to work with on the Best of Ireland food promotion, which saw more than 71 products go on sale in Lidl stores across the State for a limited period.

The range – covering everything from artisan cheeses, chocolate chip & honeycomb sausages and gluten-free beef burgers to Greek style frozen yoghurt, gourmet marshmallows and premium granola – generated turnover of over €1 million for the company.

Niall Moloney, founder and chief executive of PowCow was one of the successful suppliers last year with his high protein frozen yoghurt. His product has now been listed permanently in all 153 Lidl stores nationwide.

He described Kick Start as a “fantastic opportunity for us. It allowed us to partner with one of Europe s largest retailers and gave us a chance to showcase our products.