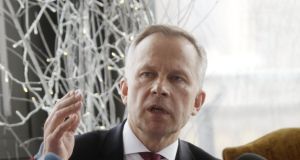 The head of Latvia’s central bank has denied bribery allegations and claimed he is the victim of a smear campaign by commercial banks in the Baltic state.

Ilmars Rimsevics refused to resign on Tuesday, but the office of Latvian prime minister Maris Kucinskis said he had been suspended from his post pending the resolution of a case that has rekindled concern over the country’s financial sector.

Mr Rimsevics, who is a member of the European Central Bank’s governing council, was detained on Saturday by members of Latvia’s anti-corruption agency, which said he was suspected of “demanding a bribe of no less than €100,000”.

“I have not demanded or received any bribes,” Mr Rimsevics said on Tuesday. “I have become the target of some Latvian commercial banks to destroy Latvia’s reputation.”

Investigators have not revealed details of the case, but the Associated Press quoted executives from Latvia’s Norvik bank as accusing Mr Rimsevics of seeking bribes; Norvik is controlled by Russian-born British citizen Grigory Guselnikov.

Mr Kucinskis said on Tuesday that Norvik could be seeking to damage his country’s international standing.

“At least at the present time, I cannot rule out that the relevant bank statement is to be considered only as an attempt to disrupt the reputation of the Latvian state,” the premier said.

“Anyone can submit legal evidence or turn to the relevant authorities and inform them about violations, including payments or demands for bribes.”

Latvia’s defence ministry also cast doubt on the reporting of Norvik’s allegations, saying they are “probably a very large-scale information operation to defame the image of Latvia. and undermine the public’s trust in the state” ahead of parliamentary elections this year.

“It is fairly likely that this is not the end of the information operation, and the sequel will follow,” Latvia’s public broadcaster quoted the ministry as saying.

Mr Rimsevics, who has led Latvia’s central bank since 2001, suggested he was being targeted for trying to root out the corruption that has long blighted the country’s financial sector.

He claimed that his home and office were recently searched after he rejected a bank’s funding request, and that he had received a text message last month threatening that he would be shot.

“Of course we see that there is damage for reputation, first and foremost for Latvia and we expect that the national enforcement authorities will address the issue swiftly,” he added.

The scandal comes at a turbulent time for Latvian banking.

On Monday, the ECB ordered Latvia’s third-largest bank, ABLV, to stop all payments due to the deterioration of its “liquidity position” amid money laundering claims and threats of US sanctions.

The US accused ABLV last week of facilitating transactions with parties connected to North Korea’s missile programme and said it had “institutionalised money laundering” and was exposed to “large-scale illicit activity connected to Azerbaijan, Russia, and Ukraine.” The bank denies the allegations.

1 Owner of Dundrum Town Centre to sell prized assets
2 How safe is it to go back to the office?
3 Elderly parents living in property you own will save you on capital gains tax
4 Sacrificing pubs for schools: Ireland’s latest Covid trade-off
5 More than 40% of help-to-buy recipients already had deposit
6 Hiring right people is key in Meath liqueur firm
7 Is foreign travel during a pandemic antisocial behaviour?
8 How to . . . move (almost) everything to your new phone
9 IPL to pay deal-breaker fee if it finds better offer than €350m
10 Eggs in a bottle – liquid gold for free-range producer
Real news has value SUBSCRIBE