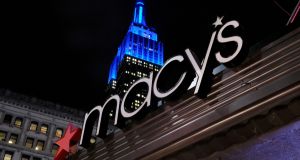 Like many bricks-and-mortar retailers, Macy’s is struggling with growth in online shopping. Photograph: Reuters

Macy’s issued another profit warning on Wednesday after the department store chain was forced to offer hefty discounts to shed merchandise, the latest sign of pressure in the US retail sector.

Shares dropped 15.6 per cent in pre-market trading to $16.34 (€14.67) after the S&P 500 company, which operates about 680 stores and employs about 130,000 people, said it expected full-year earnings to be lower than initially thought. “We had a slow start to the quarter and finished below our expectations,” said Jeff Gennette, Macy’s chairman and chief executive in a statement.

Macy’s latest earnings downgrade, which follows a profit warning after the Christmas shopping season, brings to the fore concerns about how the company is coping with declining footfall in the age of ecommerce.

The results showed sales ticked up only 0.2 per cent on a like-for-like basis to $5.55 billion in the 13 weeks to the start of August, setting a downbeat tone for earnings reports from other department store chains. JCPenney, Kohl’s and Nordstrom are also due to report results over the next week.

Mr Gennette blamed several factors for an increase in inventory levels at the company, which also runs Bloomingdale’s. He said sales of summer clothing had been slow, identified a drop in tourists visiting the US and also pointed to what he described as a “fashion miss” in its women’s sportswear brands. – Copyright The Financial Times Limited 2019