Profits drop at Irish arm of Hollister and Abercrombie & Fitch 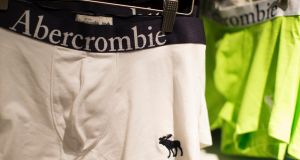 New accounts show that pre-tax profits at A&F Hollister Ltd dropped by 15 per cent to €242,002 in the 12 months to the end of February 2nd of this year.

Profits and revenues at the Irish arm of major US clothing brands Hollister and Abercrombie & Fitch, last year dropped for the fifth year running.

Last year, revenues dropped by 18 per cent from €9.9 million to €8.1 million. That is down just over 50 per cent from the €15.8 million revenues enjoyed by the company in fiscal 2013 as it cashed in on the hype surrounding the opening of its College Green store in November 2012.

Numbers employed by the company last year totalled 177, made up of 16 full-time staff and 161 part-time workers.

1 Michael Smurfit: ‘I asked Trump to invite me to the White House for my 80th birthday’
2 Ryanair expects air fares to fall when flights take off again
3 Household savings soar as consumers stop spending
4 Small businesses are cannon fodder in zealous anti-virus experiment
5 ‘I’m so lucky to be in the Caribbean – a million miles from Derry Girls’
6 Minister calls for EU to act against tobacco firms ‘undermining’ menthol ban
7 Consumers hesitant about travel as Covid-19 restrictions ease
8 Lioncor gets planning permission for ‘house of Europe’ project
9 Irish business of Carluccio’s restaurants to be wound up
10 Tax and the Pandemic Unemployment Payment: Your questions answered
Real news has value SUBSCRIBE