Luxottica and Essilor in €46bn merger to create eyewear giant 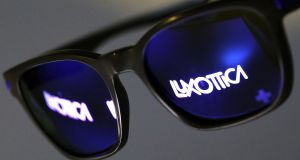 The deal brings together Luxottica, the world’s top spectacles maker with brands such as Oakley and Ray-Ban, with Essilor, the world’s leading manufacturer of ophthalmic lenses. Photograph: Alessandro Bianchi/Reuters

Italy’s Luxottica and France’s Essilor have agreed a €46 billion merger to create a global powerhouse in the eyewear industry with revenues of more than €15 billion, they said on Monday.

The deal, one of Europe’s largest cross-border tie-ups, brings together Luxottica, the world’s top spectacles maker with brands such as Oakley and Ray-Ban, with Essilor, the world’s leading manufacturer of ophthalmic lenses.

Under the terms of the merger, Luxottica’s 81-year old founder, Leonardo Del Vecchio, will take a stake of between 31 and 38 per cent in the merged group through his family holding Delfin, becoming the biggest shareholder in the company. Delfin will contribute its 62 per cent stake in Luxottica at a ratio of one share in the Italian group for every 0.461 Essilor shares.

The French lens maker in turn will launch a mandatory exchange offer on all remaining Luxottica shares, at the same ratio, with the aim of delisting Luxottica’s shares. Del Vecchio, who two years ago returned at the helm of Luxottica after a decade out of the limelight, will be the CEO and executive chairman of the merged company that will be called EssilorLuxottica and be listed in Paris.

Luxottica and Essilor, which have a market value of around €24 billion and €22 billion respectively, had already explored a possible tie-up a few years ago.