Developer adds US private equity giant as a joint venture partner for delivery of 3,500 homes 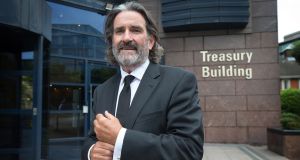 News of RGRE’s addition of the Los Angeles-headquartered investment giant as a partner on the scheme comes just weeks after The Irish Times reported how underbidders for the project had contacted Nama to express their continued interest in the site following the expiration of the 30-day time period the agency had set for the deal’s completion.

RGRE and its principal funding partners, Colony Capital, secured preferred bidder status for an 80 per cent interest in the 37-acre site with an offer of more than €160 million in late July.

The bid was well in excess of the €125 million guide price Nama had been guiding when it began marketing the opportunity in July 2019. It is also understood to have outstripped the offers made by the other shortlisted parties by a significant margin.

Following the expiration of the August 23rd deadline, representatives acting on behalf of the underbidders made both indirect and formal contact with Nama’s advisers to indicate their willingness to re-engage in relation to the potential delivery of the IGB project. While the State agency took note of these expressions of interest, it continued its discussions with the preferred bidders.

The former IGB site lands are held through a company called Pembroke Ventures. Some 10 per cent or 350 of the 3,500 homes planned for the site are to be set aside for social housing, while at least 15 per cent (525) are expected to be affordable housing. The site also has scope for up to one million sq ft of office and retail accommodation, along with a school and public space.

In terms of housing, it remains unclear if a commitment given in May 2017 by then minister for the environment Simon Coveney on State funding for 650 affordable units will be met.

Responding to queries from a local housing group last month, Nama confirmed the deal had not been finalised in advance of the site’s sale.

In its letter to the IGB Housing Action Group, the agency said: “Despite Nama’s best efforts, no commercial agreement could be agreed to by Dublin City Council with the Department of Housing, Planning and Local Government prior to the competitive process commencing in July 2019.”

“Under the planning conditions stipulated by An Bord Pleanála, the commercial agreement will have to be resolved. This will be a matter for whoever ultimately ends up controlling the site,” the letter added.