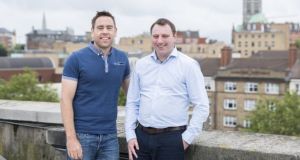 Irish elearning specialist LearnUpon has closed a $56 million (€47.4 million) minority investment in what is the company’s first major capital raise.

LearnUpon said the funding would be used to increase headcount, with 100 engineers being taken on over the next 18 months as it looks to expand into more markets.

Founded by Brendan Noud and Des Anderson in 2012, LearnUpon has developed a popular cloud-based learning management system that is used by more than 1,000 companies to deliver online training to their employees, customers, partners and resellers. Clients include Booking. com, Twilio and Zendesk.

Mr Noud said he expects overall headcount to grow to about 350 people with a “significant number of new jobs to be based in Dublin”.

LearnUpon has been a regular on the Deloitte Ireland Fast 50 rankings, which lists the top local tech companies based on revenues. In 2018, it took home the top prize at the Annual Technology Ireland awards.

The company forecast revenues of about €15 million for 2019 but, speaking to The Irish Times last year, Mr Noud said it is aiming to become a €100-million business within five to six years.

LearnUpon has grown annual recurring revenues by more than 50 per cent year-on-year for each of the last 12 quarters.

Prior to the new investment, LearnUpon had largely been self-funded, having raised just €1.25 million in seed investment previously from angel investors, Enterprise Ireland and the National Digital Research Centre (NDRC).

“We believe every learning opportunity should be an experience that advances employee, partner and customer success, and LearnUpon is purpose-built to help organisations of all sizes achieve this goal,” said Mr Noud.

Boston-headquartered Summit Partners has invested in more than 500 companies since it was established, including Avast, Darktrace and Trintech, the Irish online payments company originally founded by Cyril and John McGuire and later sold to Spectrum Equity.

“Summit brings deep experience scaling Software-as-a-Service (SaaS) businesses, as well as a number of dedicated growth-focused and technology resources that we believe will help LearnUpon build on the momentum we have established in the market. We are excited for the opportunities that this partnership will bring to our team, customers and partners,” said Mr Noud.