Eir price increases to affect one third of its customers

Telecoms group’s charges will rise for some 500,000 consumers and small businesses 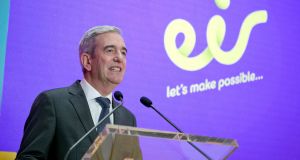 Richard Moat, chief executive of Eir, which has announced double-digit increases in call charges as well as a rise in the cost of monthly plans. Photograph: Chris Bellew /Fennell

Telecoms group Eir says only one third of its customers will be affected by a range of price rises it has announced in a letter to customers.

The former State telco says it is increasing the monthly cost of its multi-media phone plans by an average of just under €5, or €60 a year. The charges are expected to impact about 500,000 customers – both small business users and private consumer.

“Eir can confirm a price change impacting both consumer and small business customers across voice, standalone broadband and our broadband bundles,” the company said Thursday in a statement.

It said customers who have only an Eir mobile will not be affected, nor will those on those who have recently signed up to the group’s fibre to the home product.

“Even after this increase, our triple and quad play pricing is the best value in the market,” the company said.

The telecoms groups is also raising the price for making phone calls outside of free call allowances in bundles.

The call set-up fee – or charge for making the initial connection between callers – will rise to 33 cent. That’s an increase of close to 14 per cent on the current price of 29 cent.

Thereafter, local and national calls as well as calls to Eir mobile and Meteor numbers will cost 11 cent a minute, including VAT, up 22 per cent.

Calls to people using a phone from another mile provider will now cost 33 cent a minutes, an increase of almost 14 per cent while there will be a 10 per cent rise in the cost of calls to landlines in the United States, the UK and continental Europe.

Eir started sending letters out to customers outlining the new price structure in mid-August. It says everyone will receive notification at least 30 days before the changes take effect for them and they will have the option to move to another provider without penalty if they are unhappy with the new structure.