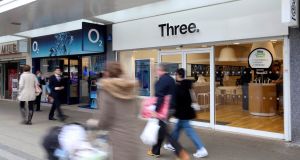 Almost 50 jobs are to be lost as mobile phone company Totterdell Communications in Bray, Co Wicklow is to close down at the end of the month.

The Irish-owned company, which is run by directors Barry and Kevin Totterdell, employed 47 staff last year alongside the two directors, according to the latest accounts filed with the Companies Office.

Totterdell was mobile network Three’s largest Irish SME partner until the decision was taken a number of months ago to end the relationship. Totterdell had been providing telecommunication sales solutions to the company.

In a statement to The Irish Times, managing director Kevin Totterdell said the company would exit the telecommunications industry when the current agreement expires at the end of the month.

“It was agreed not to renew the current service agreement between Totterdells and Three Ireland from September 30th, 2017,” he said.

“Totterdells will now exit from the telecommunications industry. We would like to thank Three for their partnership in the past and hope they have a successful future.

It is understood Three is to bring the services which Totterdell has been providing in-house.

In response to queries, Three issued the following statement: “It was mutually decided not to renew the current service agreement between Three Ireland and Totterdells.

“We would like to thank Totterdells for their hard work and commitment throughout the last 17 years and wish them all the best in the future.”

Total staff costs were in the region of €2.5 million, up from €2.1 million the year before.

Totterdell provided a range of products including smartphones, tablets, mobile broadband, an extensive range of accessories, as well as landline and broadband services.