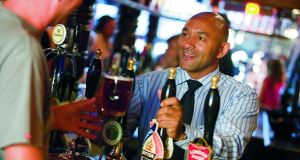 Shares tumbled 5 per cent at British pubs group Mitchells & Butlers after it blamed poor weather for a fall in sale s of drink.

The company, in which Irish tycoons John Magnier and JP McManus hold a are 22.6 per cent shareholders through their investment vehicle Elpida, said drink sales over the past eight weeks had been 1.2 per cent weaker .

However, the group, whose pubs include Harvester, Toby Carvery and All Bar One, said food sales grew by 1.5 per cent in the same period. Food and drink each contribute about half of the group’s revenues.

The group reported a 2.9 per cent rise for the 51-week period to September 16th. It reiterated its warning that margins for the full year will be below last year due to inflationary cost pressures.

Like other operators in the sector, Mitchells & Butlers has been battling increased costs, most notably from wage inflation, property costs and exchange rate movements. – (Reuters)