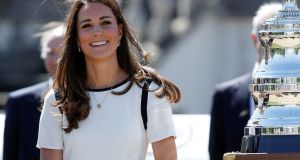 The Duchess of Cambridge wears a Jaeger dress: the firm filed a notice of intent to grant administration with the British high court last Friday. Photograph: Luke MacGregor/Reuters

Fashion chain Jaeger has collapsed into administration, putting 700 high street jobs at risk across the Uk and Ireland.

Joint administrator Peter Saville, of AlixPartners, said: “Regrettably, despite an extensive sales process, it has not been possible to identify a purchaser for the business.

“Our focus now is in identifying an appropriate route forward and work with all stakeholders to do this. We will ensure that we communicate further as this process unfolds.”

The 133-year-old firm filed a notice of intent to grant administration with the British high court last Friday, handing the retailer 10 working days to bolster its financial position.

The firm’s website lists four Irish outlets. These are a concession in Arnotts in on Dublin’s Henry Street and House of Fraser in Dundrum Shopping Centre, Richard Alan on Grafton Street, which acts as a stockist and a designer store in the Kildare Village mall.

No representatives from any of the outlets or host stores was willing to comment on the future of the brand in Ireland.

However, it is understood of the administrator has already been in touch with the Irish outlets and / or their host stores.

In the context of the overall scale of the business, the Irish operations are said to account for a very small portion of group sales and staff numbers.

Despite the failure to identify a buyer before the administrator was called in, industry sources said it would not be surprising if a buyer was “waiting in the wings” once the administration process dealt with certain issues.

It was reported last month that Edinburgh Woollen Mill had emerged as front-runner to snap up the brand. The retail group run by the billionaire Philip Day is competing against a group of bidders also thought to include Mike Ashley’s Sports Direct and Jaeger’s former owner Harold Tillman.

Jaeger is valued at £30 million by Better Capital, which is headed up by private equity baron Jon Moulton. Glen Tooke, consumer insight director at Kantar Worldpanel, said customers had become reluctant to pay full price for Jaeger clothes after a “constant stream of sales”.

He said: “Jaeger has struggled for years to truly understand its core clientele. London Fashion Week collections and more fashion-forward designs may appeal to younger shoppers but with 45 to 54-year-olds accounting for a fifth of spend, Jaeger’s tendency to overlook them has critically damaged its brand. Remarkably, discounting accounts for over three-quarters of Jaeger sales.”

Better Capital acquired Jaeger for £19.5 million in 2012 but the firm has felt the strain under the difficult conditions for high-street fashion retailers. Last year the firm said total annual sales fell from £84.2 million to £78.4 million while it booked a pre-tax loss of £5.4 million, according to accounts filed at Companies House in Britain. Better Capital has enlisted the services of AlixPartners to sound out potential buyers.

In six months we will be in the grip of a 1980s-style recession 06:30
Call to ease quarantine rules, dismal data on sales and the cost of primary healthcare 06:30
Primary care centre network will require €2.55bn investment 06:00
Aer Lingus wants quarantine period axed to resume flights in July 05:15
Shorla Pharma raises €7.4m to bring cancer drugs to market 05:00

1 In six months we will be in the grip of a 1980s-style recession
2 Apple tax case: Four individual lawyers paid over €500,000 each
3 Aer Lingus wants quarantine period axed to resume flights in July
4 Should my mam wait for house prices to drop before buying?
5 Brother is dragging his heels as executor of uncle’s will - is there anything I can do?
6 Stocktake: Has Warren Buffett lost the magic touch?
7 Irish whiskey sales near milestone of 12m cases a year
8 Shorla Pharma raises €7.4m to bring cancer drugs to market
9 Deloitte expands into cloud computing with deal for DNM
10 Covid-19 impact: Regulators may review airport passenger fees
Real news has value SUBSCRIBE