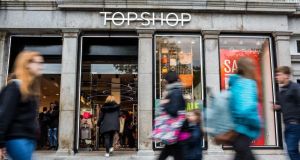 The Irish arm of Top Shop/Top Man last year plunged into the red to record pretax losses of £10.5 million (€12.3 million).

New accounts filed by Top Shop/Top Man Ireland Ltd show that it recorded the loss in spite of revenue increasing by 3 per cent from £26.1 million to £26.9 million in the 53 weeks to the end of September 1st last year.

The company sustained the loss over a non-cash charge of £11.47 million in connection with the movement of a provision against the future leasing obligations of its loss-making stores and the impairment of goodwill and tangible assets.

The non-cash charges are made up of £5.9 million in impairment of goodwill; a £3.7 million provision for the onerous leases on loss-making stores and £1.7 million on the impairment of tangible assets.

Numbers employed by the company last year decreased from 362 to 353 as staff costs reduced from £5.17 million to £5.12 million.

Accounts for a third connected company, Miss Selfridge Retail (Ireland) Ltd show that last year it recorded a pretax loss of £258,000 and this followed pretax losses of £88,000.

Numbers employed by the company last year decreased from 108 to 80 and staff costs reduced from £1.29 million to £1.16 million.

All companies are owned by Lady Cristina Green – the wife of the founder of Top Shop, Sir Philip Green.

The losses at the Irish arm of Top Shop came ahead of Lady Green’s UK Top Shop business hitting trouble this year and a rescue plan has prevented the business from entering administration.