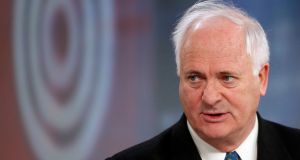 About half of all applications to finance the Irish Diaspora Loan Fund, a new immigrant investment programme requiring a minimum investment of €500,000, are from rich Russians.

Chief commercial officer Andrew Parish said the Department of Justice is processing its first six applications worth €3 million. About half of all applications coming down the pipeline are from Russia with a further 30 per cent from China and the remainder from the Middle East, according to Mr Parish, who registered some “interesting leads” during a December trade trip to Moscow.

“There is a good level of interest,” he said. “We made some good contacts there and we will be following up with them and we will be back to Russia again without question.”

The fund, which requires an investment of €500,000 over five years, has been running for just over a year.

“Most of the people who are investing have already made lots of money so their particular interest in investing in Ireland is to secure residency status,” said Mr Parish. “They are not necessarily looking for a substantial financial return – they actually want a safe place to put their money for five years to get their visa and capital back.”

Candidates for the programme must be of good character and must have a minimum of €2 million, which has been gained through honest means.

The IDLF uses the funds raised to grant hotels low-interest loans, which must be used to upgrade their facilities. Mr Parish said the fund is about to disburse its first loans to hotels, which must use their own assets as collateral.

Former taoiseach John Bruton, who sits on the fund’s board, said the diaspora fund is the brainchild of Terry Clune, chairman of the global financial services company Taxback Group. Other directors include Richard Horlick, former head of investments at UK-listed investor Schroders, and Joanna Murphy, chief executive of Connect Ireland.

Mr Bruton dismissed criticism that the fund is just a means for affluent migrants to effectively buy Irish passports.

“We hope it won’t be open to abuse, and the intention is it that won’t be,” he told The Irish Times. “The Department of Justice, which has had experience of problems in the past, are taking a lot of care in granting approvals and equally the fund will have to be very careful vetting the people concerned. I have been focused on the China market so I haven’t been to Russia.”

Mr Bruton said the lending decisions made by the fund will be “well-informed” because they are being made in a discreet sector, in which the IDLF has expertise.

“Interest charged to the hotels will be lower than the commercial rate, which makes it attractive as a form of working capital but the investor from outside obtains the possibility, under an approved scheme, of being approved for residency,” he said.

The IDLF has a portfolio of loans, so investors will not be lending their contribution to a single project. At the end of the five-year loan period, the hotels will be expected to repay the loan in full. While there is no guarantee, of course, the investors are being offered a potentially firm road to permanent Irish residency.

In return for lower-cost finance, the hotel is required to spend the financial savings on upgrading the hotel, building an extension, refurbishing bedrooms, new facilities and to demonstrate to the IDLF the growth in employment during the five-year term.

This investment in the upgrade should result in an increase of the value of the hotel, while also improving the tourism sector and creating new jobs.

The scheme is part of the Department of Justice’s immigrant investor programme, which began in 2012 and has up to about 300 applications a year. The State also runs a start-up entrepreneur programme, which offers an initial two-year residency for foreigners who pitch a business idea for the innovation sector that is capable of creating 10 jobs and returning €1 million to the economy in four years.