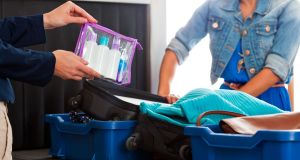 The most common virus detected on security trays was the rhinovirus which causes the common cold. Photograph: i Stock

The plastic security trays handled by virtually everyone who makes their way through an airport play host to the greatest number of viruses, according to an extensive study published this week.

Pandemic experts from the University of Nottingham and the Finnish National Institute for Health and Welfare swabbed multiple surfaces at Helsinki-Vantaa airport at peak-times during the winter of 2016 and found evidence of viruses on 10 per cent of areas tested.

The most common virus detected was the rhinovirus which causes the common cold but swabs also picked up the influenza A virus. No respiratory viruses were found on toilet surfaces which may be an indication of more regular cleaning.

Experts concluded that hand washing and careful coughing hygiene were crucial to the control of contagious infections in public areas with high volumes of people passing through.

“This study supports the case for improved public awareness of how viral infections spread,” said Professor of Health Protection at the University of Nottingham Jonathan Van Tam, “People can help to minimise contagion by hygienic hand washing and coughing into a handkerchief, tissue or sleeve at all times - but especially in public places.

He said such simple precautions could “help prevent pandemics and are most important in crowded areas like airports that have a high volume of people travelling to and from many different parts of the world.”

Virology expert Niina Ikonen from the Finnish National Institute for Health and Welfare said: “The presence of microbes in the environment of an airport has not been investigated previously. The new findings support preparedness planning for controlling the spread of serious infectious diseases in airports. The results also provide new ideas for technical improvements in airport design and refurbishment.”

A spokeswoman for the Dublin Airport Authority said she was aware of the study but she assured the travelling public that the security trays at Dublin Airport were “cleaned on a continuous cycle”.

She pointed out that viruses “are present in all major public buildings and we would always advise people to follow basic health guidelines in relation to preventing their spread.”

One thing the study may do is explode a commonly held myth that people are more likely to catch a cold up in the air via the air conditioning than on the ground. That is not to say that planes are free from germs and there are certain parts of the plane people would do well to handle with great care. The most virus-ridden part of a plane is most likely the non-porous tray table that folds on to a passenger’s lap. A 2015 study found that such surfaces had almost 10 times the amount of bacteria than the flush buttons on the toilets. Trays tested were found to carry cold viruses, the norovirus which causes diarrhoea and vomiting and - even more alarmingly MRSA.

The dial used to turn on an air vents and seatbelt buckles are typically where the next highest volume of viruses are to be found. While seatback pouches, which other passengers have used as a bin are also best avoided.

Aisle seats are more exposed than window seats because they can carry the germs from all the people who pass them and use them for support. Many such people will be returning from the bathrooms and may not have washed their hands.

Oddly, the bathrooms - which tend to be cleaned regularly - are not overly contaminated although they are not without risks.

3 Chris Johns: Growing the economy, not cutting debt, must be our priority