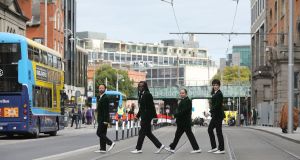 The National Lottery says its business model is under threat from a new wave of “rogue operators” that allow punters play online without buying a ticket.

Chief executive Dermot Griffin said so-called bet-on-lotto operators such as Lottoland and Jackpot. com were “siphoning off” revenue from the business and in turn from good causes.

While he declined to indicate how much market share had been lost to these firms, Mr Griffin said they had proved particularly damaging to state lotteries in the UK and Australia, cannibalising up to 20 per cent of the market in some cases.

These new industry disruptors cover the cost of big payouts through a complex formula of hedging and insurance.

“It’s hard to get data on them but we know we’re losing something,” he said. Mr Griffin said some punters were playing weekly lotto draws on rival websites without realising they were not on the National Lottery’s official website, lottery.ie.

Spokeswoman Miriam Donohoe said in marketing terms the business was having to spend more and more to maintain its visibility on Google amid aggressive campaigns from these rival sites.

Mr Griffin was speaking at the launch of the National Lottery’s rebranded Lotto Plus game, which will see the top prize on its Lotto Plus 1 draw increase from from €500,000 to €1 million. The changes will give punters a better chance of winning on the lotto’s secondary draws.

To faciliate the prize increase, the price of a Lotto Plus line will rise by 50 cent per line to €1. This will increase the cost of a standard two-line play on the Nattional Lottery with Lotto Plus from €5 to €6. The Lotto Plus game allows players enter two secondary draws Lotto Plus 1 and Lotto Plus 2 and a Lotto Plus raffle.

The changes, which kick in for this Saturday’s draw, represent the first overhaul of the Lotto Plus game in 15 years and are expected to generate an additional €5.5 million each year for good causes.

In 2017, the franchise raised €226 million for good causes, which represents about 30 per cent of total ticket and scratch card sales. Since the franchise was privatised and the online channel opened up three years ago, revenue generated from online ticket sales has quadrupled from 2 per cent to 8 per cent, which equates to about €60 million.

1 Google completes purchase of Treasury Building for €120m
2 Knock gets visit from world’s largest passenger plane
3 Varadkar resigns amid warning impasse will hit the economy
4 Garda mobile contract win causes concern over Eir’s use of Huawei kit
5 Appeals board grants planning for 354 Greystones homes
6 Billionaire Zara founder and German funds vie for prime Dublin offices
7 Beau Lotto: How to rewire our brains to spark innovation
8 Nineteen staff made redundant by Nama share €1m
9 How do you know if you are wealthy? It’s not straightforward
10 A maverick taking on the Irish whiskey establishment
Real news has value SUBSCRIBE