Nearly 10% of sales now generated online, a fivefold increase on 2015 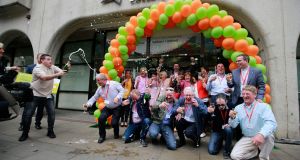 Scenes of joy as a Lottery syndicate from Stakelum’s Hardware store in Thurles collect their €17 million cheque from the National Lottery headquarters. Photograph: Nick Bradshaw

The National Lottery’s digital strategy appears to be paying off with nearly 10 per cent of ticket sales now being generated online.

That equates to sales of more than €60 million and represents a fivefold increase on 2015, the year the business was privatised and restrictions around selling tickets and scratch cards online were lifted.

One of the first things new operator, Premier Lotteries Ireland, did after taking over the business was to revamp the Lotto’s website, making it easier to register and play online.

Since then there have been over half a million downloads of the National Lottery’s app, while the average number of active online players per month this year was 102,000, up 15 per cent on last year.

In the UK, Premier Lotteries’ sister company, Camelot, generates more than 20 per cent of its revenue from online ticket sales.

“In the world we live in, with so many consumer transactions now happening online, it is a space that we have to be in in order to continue to grow our sales and increase what we are giving back to good causes,” he said.

Mr Griffin said the opening up of the online channel was being done in a careful manner to ensure responsible gaming. “We are constantly reviewing and updating our online play controls to provide our players with as much protection as possible, and to ensure they are not playing excessively or beyond their means,” he said.

“Our play limit controls are among the lowest in Europe. Our responsible gaming programme is independently audited by KPMG and complies with World Lottery Association Standards,” Mr Griffin said.

Despite the positive numbers, the internet has brought with it a new challenge. State lotteries all over the world are under attack from so-called synthetic lotteries or Lotto betting websites, which allow punters play the weekly draws without actually buying a ticket.

In the past 18 months, up to 15 such operators have entered the Irish market, but it is unclear how much of the traditional Lotto market they have cannibalised.

Premier Lotteries, which bought the Irish franchise in 2015 for €405 million, has been lobbying the Government for a crackdown, complaining that money is being diverted away from good causes as a result of these rival operations.

It also suggested that some players were playing the Lotto’s weekly draws on these sites without realising they were not interfacing with the National Lottery itself.

In Australia, the government has moved to ban all third-party betting on Lottos amid indications that up to 20 per cent of traditional state Lotto sales have been eaten up by these new operators.

The new European Lotto Betting Association, which represents operators such as Lottoland and MyLotto24, said the websites were fully regulated and licensed to operate in the Republic and simply provided punters with more opportunities to win.

They pledge to pay out similar prize money, covering the potential cost of big payouts through a complex formula of hedging and insurance, but the arrangement has not yet been tested for a big jackpot.