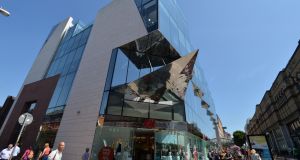 H&M Hennes & Mauritz Ireland Ltd posted a 7.7 per cent decline in like-for-like sales with revenue falling 2.6 per cent to €90.9 million in the 12 month period to the end of November 2017.

Sweden’s H&M, which opened it first store in Ireland at the Dundrum Town Centre in March 2005, said profit before tax at its Irish arm fell 5.3 per cent to €2.55 million, although the subsidiary here still paid a €3 million dividend to its parent company.

The fast-fashion retailer has 17 stores in the Republic, in addition to six COS outlets and one “& Other Stories” shop on Grafton Street. H&M itself is largely concentrated around Dublin but has outlets in Kilkenny, Limerick and Cork among other locations.

Rent costs under operating leases increased by 1.25 per cent in the period to €11.7 million.

“The directors believe the business performed well considering the challenging retail environment in 2017,” a note in the accounts filed with the companies office said.

“The gross profit margin percentage increased from 48.3 per cent in the prior year to 49.5 per cent in 2017 due to the favourable foreign currency exchange rates,” the directors said.

Founded in 1947 as a single store for women’s clothing, the group now sells across nine brands with over 4,800 stores. Active in 70 markets, its sales in Ireland last year outpaced countries including Singapore, Luxembourg and New Zealand, totalling 1.14 billion Swedish Krona (€107.4 million), according to the company’s 2017 annual report.

The Irish business increased employee numbers from 429 to 462 in the year but wage and salary costs decreased marginally to €11.3 million.

Although challenged in this market, the company said it is continually on the look out for new locations.

“The directors aim to maintain growth in competitive market conditions and will continue to look for ideal locations for new stores.”

Aside from scoping additional physical locations in Ireland, the parent company is rapidly expanding its digital offering and last year opened its online store to eight new markets.