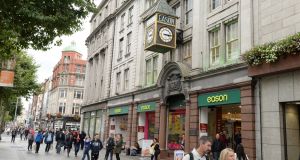 The iconic Eason store on O’Connell Street is among the 13 stores the company plans to sell. Photograph: Dara Mac Donaill

Irish books and stationery retailer Eason is planning to sell 13 properties in the Republic in a move that it expects to generate a €60 million windfall for its 220 shareholders.

This will include the sale of its flagship property on O’Connell Street in Dublin, which would be leased back from the new owner and would continue to trade under the Eason brand.

Under the plan drawn up by Eason chairman David Dilger and his board, the properties will be sold over the next two to three years. Based on current valuations, Eason’s portfolio of freehold properties has been valued at between €88 million and €96 million.

Subject to shareholder approval at a meeting in September, Mr Dilger plans to distribute €60 million of this among Eason’s shareholders, which would equate to €3 per share.

Some €17 million in cash and €2.4 million in Northern Ireland property assets would be used to capitalise its retail business, which will be transferred to a new entity, New Retail Holding Public Limited Company.

The balance of the funds raised would be used to pay associated costs, various taxes and inter-company loans.

Eason’s shareholders would continue to own the retail business, which is Ireland’s biggest book seller.

The new retail business would enter into leases with Eason Holdings PLC (EHPLC) at market rents. The properties will then be sold, with an orderly liquidation of EHPLC taking place to allow for the distribution of the proceeds to shareholders.

The planned sale of properties is designed to unlock the value that currently sits on the company’s balance sheet, and to provide liquidity for the mostly family-owned shareholders, who have owned the business through many generations.

Commercial property agents Bannon has advised Eason on the planned property sales, while accounting firms BDO and Mazars have advised on other aspects of the plan.

It is understood that Eason looked at a number of other options to release excess capital in the business to shareholders, including a share buyback scheme. However, the company views the sale of properties as being more tax efficient for shareholders.

In a letter to shareholders, Mr Dilger said the plan would deliver “tangible value” to shareholders by mid-2020, and would put Eason’s retail business on a “sustainable footing” into the future, for the benefit of shareholders, staff and suppliers.

In addition to its iconic O’Connell Street store, the portfolio of sites to be disposed includes investment properties in Athlone, Carlow, Clonshaugh, Dún Laoghaire, and St Margaret’s in Co Dublin. Other retail locations to be sold are located in Blanchardstown Shopping Centre, the Square in Tallaght, Shop Street in Galway, Patrick Street in Cork, and shops in Clonmel, Limerick, and Tralee.

An extraordinary general meeting of shareholders will be held on September 21st to approve the plan, with 75 per cent approval required to carry the vote. The company would subsequently require High Court approval to put the plan into effect.

It is understood that expressions of interest have already been received for some of the Eason assets that will form part of the disposal programme.

Eason has 34 company-operated stores (including seven in Northern Ireland), with another 28 owned by franchisees.

3 Why is loyalty punished when it comes to Irish mortgages?