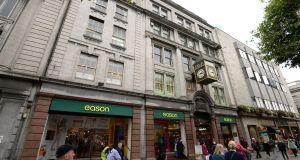 Eason recorded a 1% like-for-like increase in book volumes in the six weeks of Christmas trading in the Republic. Photograph: Dara Mac Donaill

Irish books and stationery retailer Eason posted a €500,000 increase in its revenues in the Republic last year but a decline in turnover from its Northern Ireland stores, and exceptional costs dragged the business into the red.

Eason’s 220 shareholders shared a dividend payment of €500,000 during the year, the same amount as in the previous reporting period.

Its earnings before interest, tax, depreciation and amortisation for its core trading business came in at €6.8 million, which was in line with the previous year.

Eason incurred exceptional costs of €4.2 million in relation to the closure of a facility in St Margaret’s in Co Dublin.

In terms of the trading environment, Eason experienced growth in both volume (up 1.3 per cent) and value (up 0.7 per cent)terms in the Republic. It also recorded a 1 per cent like-for-like increase in book volumes in the six weeks of Christmas trading in the Republic.

The retailer closed the year with no debt, having reduced it by €3 million in the period.

However, Eason incurred an additional €1 million in rental and utility costs. The weakening of sterling and price deflation were also issues while increasing use of online shopping by consumers impacted on store footfall, particularly in shopping centres.

Eason’s ecommerce revenues rose by 23 per cent to about €7 million, which makes its online shop the second biggest revenue generating store in the group behind its flagship outlet at O’Connell Street in Dublin.

In his review of trading, chairman David Dilger said: “The first six months saw price deflation against the previous year of 10 per cent, whereas pricing in the second six months was relatively stable compared with the previous year, as the wraparound impact of the sudden devaluation of sterling after the Brexit vote washed out.”

As reported by The Irish Times on Friday, Mr Dilger and his board have drafted a plan to sell 13 properties in the Republic in a move that it expects to generate a €60 million windfall for its 220 shareholders by mid-2020.

It will also involve a €20 million capital injection into its retail business, which is being established as a separate legal entity. The retail business will continue to be owned by Eason’s existing shareholders.

The capital injection is designed to secure its long-term future in what is still a difficult trading environment for retailers.