Company lost out to Ticketsolve in €620,000 Trinity College tender to manage ticket sales 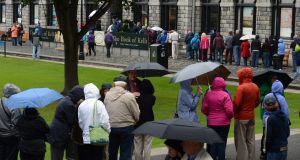 Future Ticketing, which manages ticket sales for the Book of Kells at Trinity College Dublin, alleges that its tender rival for the contract, Ticketsolve, “has no track record” operating similar systems and says it has “grave concerns” over the process which saw Ticketsolve win the contract ahead of it.

Future Ticketing, backed by Setanta Sports co-founder Mickey O’Rourke and run by former Punchestown racing executive Liam Holton, has since 2016 run the ticketing system for the Book of Kells, the fourth-most popular tourist attraction in the State with more than 1 million visitors each year.

Future Ticketing lost out to Ticketsolve in a tender last year but has since launched legal action seeking a judicial review of the decision, in a case due back before the High Court on Monday.

Trinity has defended the awarding of the tender in legal correspondence and also in affidavits filed with the court. Ticketsolve, which operates in Ireland and the UK, is not a party to the legal proceedings and so has not filed any legal papers addressing Future Ticketing’s allegations.

Future Ticketing continues to run the Book of Kells ticketing system for Trinity pending the outcome of its legal challenge, which has been admitted to the fast-track commercial list.

The row is over a four-year, €620,000 tender last year to provide an “attraction management system” or ticket sales service for the Book of Kells, which could also be used elsewhere in Trinity. Mr Holton says in his affidavit that when he was told in November that Ticketsolve had beaten his company, he was “surprised and concerned... [as] the successful tenderer has no track record in operating similar contracts of this nature”.

Ticketsolve’s website details recommendations from clients including theatres in Ireland and the UK, as well as the National Gallery in Dublin. Mr Holton’s affidavit also suggests that Ticketsolve previously beat it in 2018 to a ticketing contract awarded by Fáilte Ireland for tourist offices, but he argues this experience is not relevant to the Book of Kells contract.

The Book of Kells tender assessed applicants using 498 separate questions, covering every aspect of each bid such as finance. Mr Holton’s company alleges that the table of scores that came back, comparing his tender with the winning bid, “did not afford any transparency whatsoever”.

Mr Holton alleges in his affidavit that Ticketsolve “appears to have held itself out as being able to provide certain parts of the service that, to the best of my knowledge, [Ticketsolve] does not and cannot currently provide”.

In particular, he takes issue with a line in the tender notification that said Future Ticketing’s bid did not provide an example of how it intergrates with online travel agents, while the winning bid “confirms integration with... TripAdvisor”.

Mr Holton says he subsequently contacted a “representative of TripAdvisor” who confirmed in writing that the online travel group does not currently integrate with Ticketsolve.

He also claims that Ticketsolve would take up to six months to integrate with a chip and pin payments provider, whereas Future Ticketing could do it in four weeks. Yet, he alleges, both companies were scored the same on this criteria.

Future Ticketing is asking the High Court to rule that the process was flawed on a number of grounds, including “errors” in assessing Ticketsolve’s bid and that the scoring was “ambiguous or discriminatory”.