US casinos group boosted by deal with Paddy Power owner 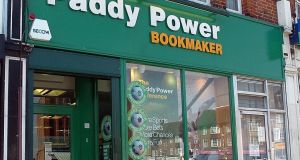 US gambling group Boyd Gaming says a deal with Paddy Power owner Flutter Entertainment is helping to lure new customers to its casinos.

The news comes days before the Irish gambling giant publishes results this week, and as regulators continue to scrutinise its planned €12 billion deal with Canadian player Stars Group.

Flutter US subsidiary Fanduel offers sports betting in partnership with Boyd at the group’s casinos in a number of states.

The US federal supreme court liberalised sports betting in 2018, paving the way for individual states to legalise gambling on baseball, basketball, football and other events.

Fanduel needs a physical presence in each state, along with its online operation, as individual jurisdictions legalise sports betting. Boyd provides this through a partnership forged by the pair in 2018.

The Irish company and the Canadian business announced the €12 billion deal, which will create the world’s biggest gambling group with 10 million customers, in October.

The UK’s Competition and Markets Authority is continuing its phase one investigation of the planned merger.

Flutter has businesses in Ireland, Britain, eastern and western Europe, Australia and the US.