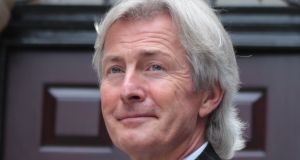 Paul Tweed, who has acted for numerous celebrities and senior political figures, is a partner in Gateley Tweed.

A Belfast legal firm, led by the North’s top libel lawyer Paul Tweed, has been acquired by a London-listed legal and professional services group in a deal valued at £2 million (€2.3 million).

Gateley Holdings said the acquisition of Paul Tweed LLP (Tweed) will provide it with a “platform for growth in Northern Ireland and the Republic of Ireland”.

The Belfast firm provides a range of legal services and specialises in providing “multi-jurisdictional advice on reputation, media and privacy”.

It was established in 2017 by Paul Tweed, who has also founded a number of other companies including Paul Tweed Media LLP.

Tweed will now be known as Gateley Tweed and is one of eight companies in the Gateley group, which was the UK’s first commercial law firm to list on the London Stock Exchange’s AIM market in 2015.

The organisation, which employs 1,000 people across nine UK locations and has an office in Dubai, reported a turnover of £103.5 million for 2019.

Mr Tweed who, throughout his 30-year career, has acted for numerous celebrities and senior political figures North and South, is a partner in Gateley Tweed.

Selena Kerins is also listed as a partner in Gateley Tweed while Peter McGrath and Emma Jane McSteen are listed as senior solicitors in the business which will continued to be based in Belfast.

Commenting on the acquisition, Mr Tweed said on Monday: “I am very much looking forward to working with the Gateley team. The extensive expertise and full legal service that Gateley provide will significantly enhance our offering to clients.”

Gateley has stated that under the terms of the Tweed acquisition it will pay “£2 million settled 50 per cent in cash and 50 per cent by the issuance of 529,520 ordinary shares of 10 pence each in the capital of Gateley at a price of £1.8885 per ordinary share.”

Michael Ward, Gateley’s chief executive officer, said the organisation had been considering expanding into the Irish market for some time.

“We see this move as a springboard for developing a strong legal services offering in Ireland as well as supporting our growth plans for Gateley Capitus, which was our first transaction as a plc in 2016 and is already well established in Belfast.

“The acquisition is highly complementary and we have already identified a number of opportunities for our national teams, particularly in commercial disputes resolution and litigation,” Mr Ward added.