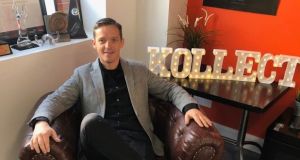 Kollect chief executive John O’Connor: the company was founded in Co Waterford and is listed on the Nasdaq First North Growth Market in Sweden.

Irish waste start-up Kollect on Demand enjoyed strong growth across a number of its revenue streams in January compared with the same month last year.

Kollect, which allows businesses and consumers to arrange waste collection online, was founded in Co Waterford and is listed on the Nasdaq First North Growth Market in Sweden.

Consumers and businesses use Kollect’s website to have bins and junk collected or to hire skips. Its system connects customers with local licensed waste disposal companies prepared to take rubbish on demand.

Kollect hires the waste collector and charges the customer, receiving about 35 cent from each euro they pay, giving the balance to the waste disposal company.

In a trading update for January 2020, which was published on Friday, it said monthly revenue growth from skip hire increased from €8,000 to €63,000 over the year.

The number of collections increased from 29 in January 2019 to 208 in January this year.

Junk removal also grew strongly in Ireland with the number of collections going from 58 to 310. Gross profit for the comparative months increased by 1,236 per cent.

Revenue from junk removal grew from €5,000 to €58,000 over the course of the 12 months from January last year to January this year.

The number of collections under the same heading was also down somewhat from 5,400 in January 2019 to 5,200 in 2020, which corresponds to year-on-year reduction of approximately 4.6 per cent.

The gross margin was down by approximately 10 per cent as a result of increased disposal costs.

The number of collections of commercial bins increased by about 22 per cent from 95 to 123. The gross profit for the comparative periods was also down by approximately 9 per cent due to the same increase in disposal costs as for domestic bins.