DCC announces appointment of new CFO and board member 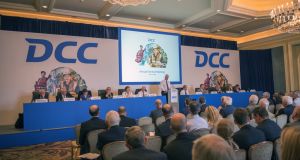 Diversified energy and services group DCC has announced the appointment of a new CFO. Photograph: Brenda Fitzsimons / THE IRISH TIMES

Diversified energy and services group DCC has announced the appointment of a new chief financial officer to replace Fergal O’Dwyer who is to retire from the company this summer.

Mr O’Dwyer, who has been chief financial officer since 1994, has decided to retire from the group after 31 years of service. He will stand down from his position and from the board following the conclusion of DCC’s annual general meeting on July 17th.

Mr O’Dwyer will be succeeded by Kevin Lucey who has held the role of head of capital markets since 2017. He will also be appointed to the board of DCC as an executive director.

DCC chairman John Moloney paid tribute to Mr O’Dwyer. “His exceptional commitment and dedication over many years has contributed greatly to the successful growth and development of DCC,” he said.

DCC has also announced the appointment of Tufan Erginbilgic as a non-executive director and a member of the remuneration committee and of the nomination and governance committee with effect from April 6th.

Mr Erginbilgic has been BP’s downstream chief executive, and a member of its executive team since 2014, with responsibility for its global fuels, lubricants and petrochemicals businesses. He plans to leave this position at the end of March 2020.

“I warmly welcome Tufan to the board,” said Mr Moloney. “His leadership experience and expertise in the downstream global fuels, lubricants and petrochemicals businesses will deepen board knowledge and insight in regard to key sectors in which DCC operates.

“His detailed knowledge and experience of new energy technologies and applications are of particular relevance to DCC as we continue to expand the range of cleaner energy products and services we provide.”