Friday Interview: from Paris to a ‘chunky challenge at Grafton Merchanting ROI 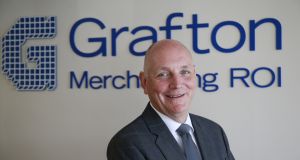 Patrick Atkinson: “The Americans are brilliant at not wasting a recession, they knew this was cyclical and they’d been through it.” Photograph: Nick Bradshaw

“How do you feel about moving home,” a head hunter asked Patrick Atkinson over the phone in 2015. The marketing executive had spent just more than 10 years living in Paris working for manufacturing giant Saint Gobain, much of which was spent travelling across the world, scoping out new markets and developing existing ones.

The call came at a good time as Atkinson wanted to spend more time with his wife and three sons who had moved back to Ireland in 2012.

“I was the guy rocking up to the rugby field on a Saturday morning from the airport with the wheelie bag, and on the Sunday I was preparing to take a long-haul flight to somewhere else,” he said.

His job as a global marketing manager for Saint Gobain took him to India, South Africa, the Middle East and southeast Asian countries. When he decided he wanted to move on, the company did not have a job that would have suited him in Ireland.

Now, Atkinson is the chief executive of Grafton Merchanting ROI – an arm of the Dublin-based listed company Grafton Group. It accounts for 16 per cent of Grafton’s €2.5 billion turnover and 21 per cent of its profit.

“The good thing about the business was that it was chunky enough to be a challenge,” Atkinson said of the move back to Dublin.

Atkinson oversees the Chadwicks and Heiton Buckley builders’ merchant brands in the Republic, a unit that has recorded double-digit growth for the past three years.

Being closely aligned to property, it’s a business that has experienced peaks and troughs, and while Atkinson joined it at the upward part of the cycle he’s conscious that the cycle can turn.

“I expected a very tired business, one that would be traditional. I didn’t quite find that. I was really impressed at how solid it was. He [Eddie Kelly, the former chief executive] had almost done the American thing of not wasting the recession.”

The “American thing” is something Atkinson first encountered in Saint Gobain. His time with the company coincided with the global financial meltdown, and as part of his job he had to deal with redundancies.

“I remember chatting to the US business and saying we need to lose three plants. The Americans are brilliant at not wasting a recession, they knew this was cyclical and they’d been through it.”

He found Europe wasn’t quite so understanding. “You go to Italy and do that and it’s ‘mamma mia’ time.”

He recalls one particular day when Italian workers travelled to the French head office and egged the building before spraying graffiti on it. That didn’t seem to faze the venerable building materials giant. “Around five o’clock there were guys abseiling down the building and the place was spotless half an hour later,” he recounts.

However, Europe’s financial woes caused Saint Gobain to look elsewhere for business, and Atkinson was tasked with establishing new markets. His work brought him to around 40 countries a year and, for the most part, kept him out of Paris.

The move he agreed with his wife was to work in Paris, but without him there it didn’t make much sense for the family. “We needed to put a bit of stability into their [the children’s] school life.”

There was an upside to his globetrotting. If Atkinson was working in a particular country for an extended period, his family would set up shop there for the summer. “The boys went one summer to South Africa. They spent another in Portugal...we got to spend good time together doing that.”

Atkinson appears to be a tough taskmaster. On the morning we met he had come from dropping his 16-year-old twin boys to a building site where they were working for the day. He believes learning about the value of money is an important life lesson. By the same token, he wants to ensure they are no strangers to hard work.

“They need to understand that there’s a value to the euro that you earn and what you’re putting in is coming out.”

His own upbringing wasn’t a world away from the values he is trying to instil in his children. The youngest of four, Atkinson grew up on his family’s farm in Wexford. “There was no escaping work. You did whatever needed to be done.”

He recalls one summer, aged 14, when his mother made him go to typing lessons for two hours every morning.

“I remember coming back every day and asking why I was doing this. She said, ‘well someday you might have a keyboard at your desk and you’ll be very grateful that you learned how to type’. She was that sort of forward thinker.”

The typing lessons stood to him, but weren’t necessarily crucial to his first job. Atkinson worked for Masterfoods Ireland, now Mars. As a sales associate he was “out on the road”, selling dog food, Dolmio sauce and Uncle Ben’s rice to “mom and pop grocery stores”.

The job showed Atkinson how to sell. “It was a really energetic environment,” he said, noting the group was launching around four new products a week at the time.

It also allowed him considerable freedom, and as part of his work on the company’s dog food range he devised a campaign for Pedigree Chum. “I was the one who approved the ‘eight out of 10 top breeders prefer it’ ad,” he says, quite proud of the achievement.

After his work with Mars he moved to Bosch before joining Wavin, the plastic pipe manufacturer, where he stayed for 13 years.

He was eventually convinced to move to Gypsum Industries which, only months after he joined, came under the ownership of Saint Gobain.

Before he left the French group in 2015, however, his former employer offered him a senior role in Philadelphia. Sitting in the company’s Paris boardroom, Atkinson rang his wife and told her the news.

“[That’s a] bitch of a commute for you,” she told him over the phone, he says. “We had agreed that if we were going to move again we’d move before the boys got back from Paris. They needed to get into school and go through.”

His tenure has led to a raft of changes at the group. For example, some branches opened at 8am and closed for lunch. These practices didn’t meet the needs of customers so opening times were brought back to 6.30am and the lunch closure was scrapped.

Atkinson has also moved to streamline the unit’s IT systems, which operated on a number of platforms.

Atkinson’s job puts him in charge of two major brands – Chadwicks and Heiton Buckley – but also encompasses companies Grafton has acquired, including Telfords in Portlaoise and Cork Builders Providers.

Is there scope to rebrand under one name?

With Chadwicks more prominent in greater Dublin and Heiton Buckley more established outside of the capital there isn’t much overlap, and, as Atkinson explained, some customers may have brand loyalty they believe to be important.

For example, Telfords, he says, is a “go-to” shop in Portlaoise. “It’s so ingrained in the industry down there. You don’t throw the baby out with the bathwater if you’ve got good equity in a brand.”

The recession post-2008 saw a significant cohort of Ireland’s construction workers leave the country, many of whom have not returned. For Atkinson, overcoming the housing crisis won’t be done by giving tax cuts to developers but by getting the right talent and building better.

On the talent front, he recognises a certain “snobbery that exists”. At a social event he spoke to a consultant’s wife and was promoting the idea of young people getting involved in building and apprenticeships, before she said “well, that’s not really for our children, is it?”

Atkinson tells this story with some amazement. The snobbery, he believes, needs to be overcome to ensure the industry doesn’t lack talent going forward.

How do we solve the housing crisis?

“We’re hung up on three- and four-bed semi-ds. I think we’ve missed some opportunities in the city centre to go higher,” he says when asked about solutions to the issues.

“If you look at Paris, they kept the wonderful Haussmann architecture in the city centre and they put offices and housing in high rise in La Défense and other areas like that, which works.”

While Atkinson isn’t able to solve the housing crisis, he’s happy with the way the building trade is recovering. The week we met he had come from relaunching the company’s Heiton Buckley branch in Monaghan. “You invest in your assets when you can,” is his mantra.

“It’s our job to stay relevant for our customers. There are always challenges.”

Something you might expect: With his interest in advancing the cause of apprenticeships in the construction industry, Atkinson is chair of the access-to-skills advisory committee for Dublin Institute of Technology.

Something that might surprise: Atkinson is a keen amateur landscape photographer, a pastime he picked up when he was “quite young”.