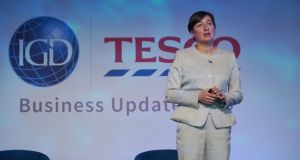 Tesco UK executive Kari Daniels has emerged as a candidate to replace Andrew Yaxley as head of Tesco Ireland.

Ms Daniels has been commercial director packaged foods at Tesco UK since February 2015. She joined the company in 2002, having previously worked for Superdrug, Wella, SC Johnson Wax and Burton Group.

She has been a trustee of Battersea Dogs & Cats Home in London since early 2015.

Mr Yaxley finished his time in charge of the Irish business on Friday, having recently been promoted to group chief product officer, with a position on the company’s executive committee.

His appointment followed a number of executive movements in the company after the chief executive of Tesco’s UK and Ireland division was diagnosed with throat cancer. Charles Wilson has been undergoing radiotherapy and the company said he has responded well to the treatment and “all the signs are that the treatment has been successful”.

Tesco is the largest grocery retailer in the Republic, with a market share of more than 22 per cent.