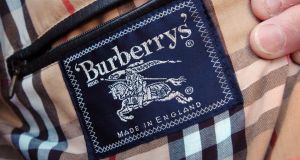 Burberry destroyed more than £28 million worth of its fashion and cosmetic products over the past year. Photograph: Barry Batchelor/PA Wire

Burberry destroyed more than £28 million (€31 million) worth of its fashion and cosmetic products over the past year in a practice now common across the retail industry to guard against counterfeiting.

The luxury British brand burned the products, totalling £28.6 million in value, including £10.4 million of beauty items, according to detail in its annual report.

Destroying products has become common practice for the industry, with retailers describing it as a measure to protect intellectual property and prevent illegal counterfeiting by ensuring the supply chain remains intact.

Burberry said it only destroyed items that carried its trademark and only worked with specialist companies who were able to harness the energy from the process.

It said the destroying of cosmetic items was a one-off related to the licence Burberry agreed with beauty company Coty last year.

A Burberry spokesman said: “Burberry has careful processes in place to minimise the amount of excess stock we produce. On the occasions when disposal of products is necessary, we do so in a responsible manner and we continue to seek ways to reduce and revalue our waste.”

Burberry’s clothing is priced at the high end of fashion retail, with men’s polo shirts selling for as much as £250 and its famous trench coats costing around £1,500.

The group has said it takes its environmental obligations seriously, and recently joined the Ellen MacArthur Foundation’s Make Fashion Circular initiative to prevent waste in the industry.

But the fashion house warned that sales in the UK and Europe had been knocked due to weaker tourist demand, but that Chinese tourists had lifted sales in Hong Kong, Korea and Japan.

Burberry is gearing up for the first collection from its new chief creative officer, former Givenchy designer Riccardo Tisci.

Burberry is also collaborating with veteran British designer Vivienne Westwood, who is creating pieces for the brand that will be sold from December.