Founders Chesky, Gebbia and Blecharczyk to sell almost $100m worth of shares in flotation 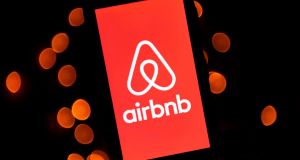 Airbnb: Short-term rental group struggled in the immediate aftermath of the pandemic as travel came to a grinding halt. Photograph: Lionel Bonaventure

Airbnb said on Tuesday that it was aiming for a market valuation of up to $34.8 billion (€28.8 billion) in its initial public offering (IPO). It would cap a stunning recovery in fortunes after the short-term rental group’s business was heavily damaged by the Covid-19 pandemic earlier this year.

In a regulatory filing, Airbnb set a target price range of between $44 and $50 apiece to sell 51.9 million shares, which would pull in $2.6 billion. Airbnb could end up selling $2.85 billion at the upper end of the range.

Of the shares being sold, Airbnb founders Brian Chesky, Joe Gebbia and Nathan Blecharczyk will together sell nearly $100 million worth of shares in the IPO launch.

Airbnb struggled in the immediate aftermath of the pandemic as travel came to a grinding halt. It had to lay off a quarter of its workforce and seek $2 billion in emergency funding from investors, including private equity firms Silver Lake and Sixth Street Partners.

But as lockdowns eased, more travellers opted to book homes instead of hotels, helping Airbnb post a surprise profit for the third quarter.

Airbnb’s market capitalisation at $50 per share would total $29.8 billion. Chesky’s stake would be valued at about $3.8 billion, while those of Gebbia and Blecharczyk would be worth about $3.5 billion each. Sequoia Capital, which first invested in Airbnb in 2009, would have a stake worth more than $4 billion.